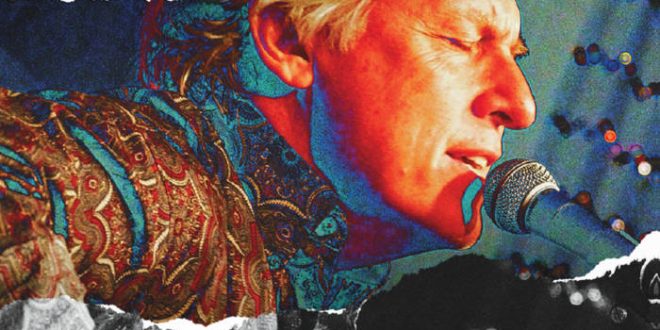 Williamsburg, Virginia, known as a lush and green portion of the Northeastern United States is the highlight of this moment in time… A beautiful city but distinctly standing out as one of the first places where the earliest settlers came to America known as the Jamestown Settlement, Williamsburg, Virginia has a hidden gem that is attracting more than tourists and that hidden gem is none other than Mark Rogers! Rogers has done it again with an amazing second EP called, “Qualifiers,” and is stirring a lot of curiosity among the music industry currently.

Hailing from Williamsburg, Virginia, Rogers is no stranger to music having traveled abroad to many places before coming back to where it all started for him. ‘Qualifiers,’ is a 6-song EP touching on a ton of musical genres that include Country, Americana, Blues, Jazz, but all have an eclectic tone as Rogers has brought together an amazing sound with an even more amazing cast of musicians including Larry Berwald, Dave Hufstedler, Jamie Lewis, Andrew Payne and Ryan Gaujot to pull it altogether. Rogers has a truly impressive gift of the guitar where no matter what the genre is, his skill makes the song sound authentic toward whatever genre or tone that is going for! While also being a truly amazing guitarist, it’s the vocals that Rogers has that captivate the audience. Eric Clapton, John Lennon, Sir Elton John, Billy Joel, and James Taylor have the same type of silky voice that can be heard on the ‘Qualifiers’ EP by Mark Rogers.

The opening song, ‘No Bigger Fool,’ really sounds just as bluesy as they come! With a killer B-3 Organ hammering the song together, every guitar note played pushes deeply into the southern soul sound of music that Rogers has the ability to create! Having that person questioning love again, and trying to figure out whether to try it again, guess what!? Music this good makes you want to find someone just to go out on the town and dance with!

The second song, the title track called, ‘Qualifiers,’ is that true song about how women really place out the qualifiers toward gaining her heart…A very truthful song as relationships come and go but yet the requirements that people place out in life today are done because of being hurt in the past… Hearing the lyrics, ‘Her qualifiers…It’s how you treat them…Meet them…” direct lyrics from a very rich song that carries so much heavy truth and a steamy vocal arrangement from Rogers, while also spotlight how thoughtful lyrics can be from anyone trying to win at love. Great stuff!

The third and fourth songs, ‘Imagining and The Blues Are Passing By,’ showcase the diversity of Rogers as a musician. “Seems like I’ve been gone a long time…Out there on the borderline…No one really knows where I’ve been…Let’s just say I’ve been gone again…” direct lyrics from such a message-driven song…Who has not spent time imagining? At some point in life, imagination got the best of everyone in the entire world for if it had not, no one would believe in dreams or pursue them. This song is a personal favorite from the EP for sure as it speaks about something that has to be done in order to believe in the law of attraction. “The Blues Are Passing By,’ feels like an evening in Cuba…Totally amazing in the way that it was recorded, crafted, but also make the person listening smile, find a chilled bottle of wine, and find someone to dance with closely…Although the song has such a cheerful sound, it is actually has a sad tone as the main character is seemingly going through a rough moment in their relationship as someone just wants to move on…Breakups are tough but Rogers made a classy goodbye song in such a beautiful way!

The last moment of the EP is spent on the two songs, ‘You Can Lead Me On and The World Changed Forever,’ are the magical end to the journey through song…”You can lead me on…You can lead me on…” such beautiful lyrics with such a clear message…The heart and love win altogether…To go from writing right to writing wrong, this song speaks so much about how life can become in such a quick way…An amazing way to speak…Lastly, a very moving song and tribute to John Lennon in ‘The World Changed Forever…’ Such a tragic moment when the famous singer/songwriter passed away, but the meaning that he left is captured in this moving tribute written by Mark Rogers. The comparison of the world and John Lennon are very passionately written as so many moments in history are also captured in this song, and personally, I have to say that this is one of the spotlight songs for the ‘Qualifiers’ EP!

Mark Rogers is a hidden jewel for sure and has so much to offer to the music lover just because of the diverse moments that he captures all types of mood, message, and life lessons on the ‘Qualifiers’ EP. With his ability as a professional musician, Mark Rogers definitely has given his heart in song! I highly recommend this EP as well as checking out Mark Rogers live if ever given the moment!

Stephen Vicino is the founder of MusicExistence.com. He created this site to give talented musicians a voice and a way to be discovered.
@@svicino
Previous Soulmusse – Solar Eclipse prod. IVN
Next Ice Creme Starts New Music Label ‘Be happy’