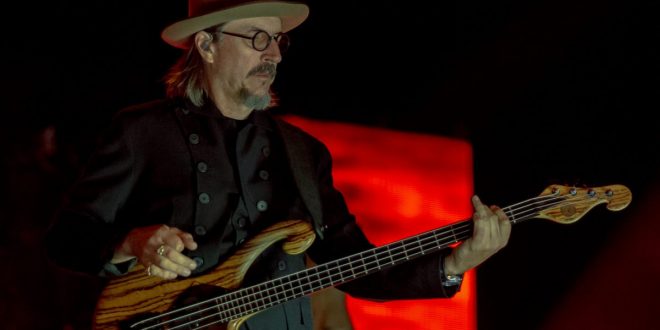 On Sunday night, Primus brought their funk to the world famous Coney Island boardwalk as they played a co-headlining show at the Ford Amphitheater with Atlanta based Mastodon. With soft chants of “Primus Sucks” as the lights dimmed before the band would take to the stage, a stage set with a giant swamp like backdrop and giant LED screens from end to end on the stage that hosted visuals pertaining to each song. Opening their set with a fan favorite “Too Many Puppies” before going right into “Sgt. Baker” off of 1991’s classic “Sailing The Seas of Cheese”. Before going into the next song Primus frontman Les Claypool would take a moment to thank Mastodon for joining them on tour and describing the band as vikings. Primus then went on to play a few more songs of the set, a set that included 2017’s  “The Desaturating Seven” in it’s entirety before Les Claypool would address the crowd by telling them “the acid is about to kick in, no seriously I ate some acid”.

As images from the book “The Rainbow Goblins” appeared on the giant LED screens Primus would begin to go through “The Desaturating Seven” in full which seemed to stump a lot of the newer fans, fans in which seemed to not be familiar with any of the new stuff from Primus. After playing “The Desaturating Seven” in it’s entirety Primus then played “Nature Boy” and Welcome To This World” before delivering the crowd the heavy fan favorites “My Name Is Mud” and “Jerry Was a Race Car Driver” and ending their lengthly two hour set with “Tommy the Cat”. While the main focus was definitely on the new material, Primus still delivered most of their classic fan favorites for the crowd.

NewYork Based Photographer. Music Enthusiast with a background in Graphic Design. Whether I'm shooting a live event or just out wondering the streets its about capturing the moment.
Previous Gallery: The Wonder Years @ Palladium in Worcester, MA 06/07/18
Next Gallery: Iya Terra at The Hard Rock Hotel and Casino in Las Vegas, NV 05/23/18