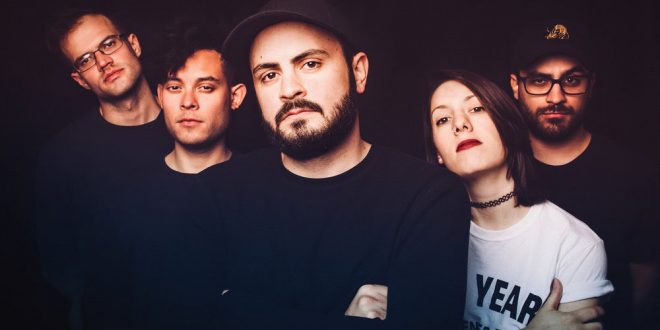 New Jersey rockers, Can’t Swim, haven’t been one for slowing down, having been performing across the States for the past few months. As they finish their first show out of three at Slam Dunk Festival in Leeds City Centre, we chatted with vocalist Chris LoPorto and rhythm guitarist Danny Rico about future plans with a new record, and Wetherspoons, of all places!

Last time I saw the band was at Creeper’s “Theatre of Fear” tour back in December; what have you been up to since then?

CHRIS: We toured a lot, I don’t think we’ve been to England since then.

DANNY: No, that was the last time we were over here, but we’ve been touring in the States profusely ever since, but we’re here now, so it feels like one long round trip since the Creeper tour.

Your most recent record is Fail You Again, released back in March 2017 – how was that for you?

C: Making it was fun, we did it all ourselves, sat in a room, made 16 songs; now we’ve been touring on it for about a year and a half, so we’ve become accustomed to the songs, pretty much makes up the whole band’s identity, and yeah, it was a blast. But now it’s time to make another one!

You performed on the Signature Brew Stage earlier today – what was that like for you guys?

C: It was good. It was early in the day, we woke up in time, and it was a blast.

What are you looking forward to most about the remaining dates at Slam Dunk Festival?

D: Hopefully there’s more Wetherspoons to be had! That’s probably the most important thing!

C: We’re not gonna play unless Wetherspoons caters it! Just checking out the bands; a lot of bands maybe clash with each other, so you’ll see Jimmy Eat World one night, then see Every Time I Die, or something like that. A lot of friends come to these shows, and we’ve just been hanging out.

Finally, after Slam Dunk, what are the plans for the future for the band?

Fail You Again is out NOW!