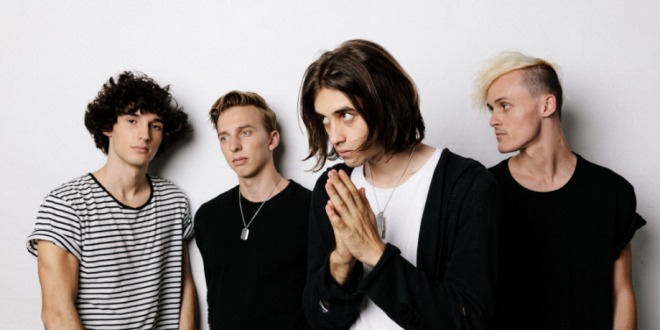 Australian band, The Faim, have been having a busy year so far, touring all around the world with bands like Lower Than Atlantis, Milk Teeth, Boston Manor, and Sleeping With Sirens. As they finished their first performance out of 3 at Slam Dunk Festival in Leeds City Centre, we chatted with vocalist Josh Raven and bassist Stephen Beerkens about more upcoming shows, and what could be next for the band in terms of music releases!

What were the band up to before coming to Slam Dunk Festival?

STEPHEN: Oh, so much!

JOSH: We’ve been doing a lot of touring, it all started in April, touring with Lower Than Atlantis, 2 weeks with their headline tour. Then both us and LTA went to Australia and New Zealand. Toured with Sleeping With Sirens for 2 weeks around there, which was awesome. Back for another 2 weeks with Lower Than Atlantis for their headline shows, then we had our own headline shows, we had Great Escape Festival, we had a week long tour with PVMTS, we were in Glasgow yesterday, drove straight down here, got rest of this festival, got Camden Rocks Festival, a few more headline shows, then we’re off to Germany for a few shows with Dangerous Summer, then back for Download Festival, then back to Australia for the PVRIS tour! And THEN we go home!

S: And then we record!

You’ve had a few singles released recently; any plans for a full-length EP or album?

J: Yeah, we can’t wait to get all these songs out to the world, it’s gonna be amazing. They’re all ready to go, gonna start feeding them out there!

You’ve just finished your set on the RockSound Breakout Stage – how was that for you?

J: It was amazing!

J: Couldn’t believe how many people were there, we were the 2nd band on, and then the room was awesome it was vibrant, just really awesome. It’s crazy to see people singing songs that, not only have we released, but not released!

S: On top of that, from the tours we’ve released, seen familiar faces; it was pretty cool.

J: It’s great to see people that we know, and have even become friends with on the LTA tour; seeing their face in the crowd was just amazing.

What are you looking forward to on the rest of Slam Dunk Festival?

J: The same thing; playing great shows to great people! I cannot wait, I’m excited to see other bands as well. Hopefully our times don’t clash to much with everyone else’s so we can see as much as we can, meet as many people as we can; yeah, just excited for that!

Finally, after all the festivals and tour dates, what’s next for the band?

S: We’re going to a lot of different countries!

The new single, “Summer Is A Curse” is OUT NOW!