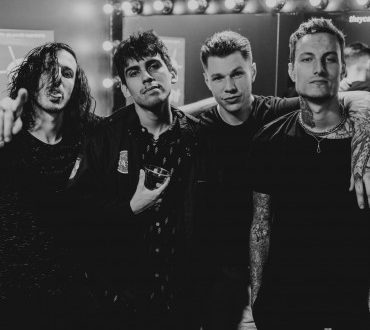 Interview with Crown The Empire at Slam Dunk Festival 2018

Performing on the last Warped Tour later this year, Crown The Empire show that they aren’t slowing down anytime soon, having performed all over the globe, and recording for an upcoming album. As they geared up for their performance at Slam Dunk Festival in May, we chatted to the band about their plans for the set, and even English Breakfast!

You’re playing at the Impericon Stage later today; what have you guys been up to beforehand?

ANDY LEO VELASQUEZ: South East Asia; we just got back, it’s was our first time. It was great out there! It was surreal, it felt like I was on another planet in some places – there was a lot of McDonalds there though, so it was something comforting. We ate a bunch of weird food, had some ox tongue! A lot better than you would think!

A: Now you have to name all of them! We did Thailand, Taiwan, Singapore.

BRANDON HOOVER: We did Japan; did Osaka and Tokyo again. We’d done those before, but those are always good.

Your last album Retrograde was released back in 2016 – are you working on anything for the next album?

A: We are working on new shit; we’ve been playing one of the new songs called “20/20” for months now. 4 months. We’ve just been going crazy for playing the same songs for so long, we had to throw something fucking new into the mix. So we’ve been opening with it, become comfortable with some of that stuff, but yeah new music’s on the way. Obviously there’s a lot more stuff behind the scenes that has to be worked out before, just dump out, which I’d love to do, just my favourite thing to do is dump it out.

You got any surprises in store for your performance later?

BH: I know Alex [Biro] from Selfish Things said that he has a surprise for the set, he had to order it a week before, mail it to his [tour manager]. I’m not entirely sure what it’s gonna be, but something’s gonna happen! There’s also gonna be surprises in the set!

A: It’s gonna be the best set you’ve heard all night.

You’ve also recently announced a UK tour – you looking forward to that?

A: Yes, we’re huge fans of the UK, this is the first place away from home I get to rebel, so everytime I come here, the smells, the people, the accents, the food; all that is a fun time! Had a Full English Breakfast about an hour ago! Double sausage.

A: The black pudding, I just crush it up, and drain lines of it! That’s to get into the spirit! You can’t have a rock ‘n’ roll day on just cereal!

A: If the vibe is good, the show will be good. The sound is always sketchy outside, so-

BH: Today we are!

H: That is the weirdest thing about festivals, when you expect play outside, but when you get there, you’re just in an aeroplane hanger. Ok, cool, we’re not outside!

Finally, after Slam Dunk, and your UK tour, what’s next for the band?

A: It’s not announced yet.

BT: Probably new music. We’ve been working on our new album for a while now, so we’re gonna have some songs, some videos coming out pretty soon.