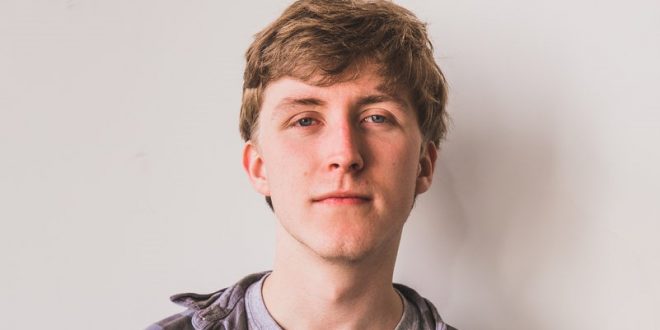 Acoustic shows aren’t what spring to mind when it comes to pop punk festivals, but they’re something that should never be underestimated, especially when it comes to Birmingham-based acoustic performer Luke Rainsford. As he prepares for upcoming performances at 2000 Trees Festival in Cheltenham and Fat Lip Festival in Bristol, we chatted to him before his first performance at Slam Dunk Festival in Leeds!

You’re performing at The Key Club Acoustic Stage – what have you been up to beforehand?

Mostly just getting ready really. I’ve watched a few bands, had a look around; it’s my first time at Slam Dunk, so I’m just gonna try and take it all in! I’ve been before, but I’ve never played so gonna hang out, try and stay relaxed, try and chat to people.

Your EP, I Just Don’t Deserve To Be Loved, was released recently; how was that for you?

Amazing, the release has been really cool. A bit apprehensive as I’ve always done full-length, so I’ve self released a full-length, then a full-length with my label; going back to an EP was a bit of a jump, but it’s been really really cool. The songs on there are some of the best songs I’ve ever done. I’m really happy with it. People have been responding well to me live as well, which is always great – people knew the words straight away. It’s been great, I’m really happy with it.

You’re also playing at some upcoming festivals, like 2000 Trees Festival in Cheltenham, and Fat Lip Festival in Bristol – you looking forward to them?

Buzzing, so excited, 2000 Trees especially, I’ve always wanted to go, and now I have the chance to play, it’s incredible! Slam Dunk’s my favourite so far; haven’t seen too much yet, but it’s still just so great to be here. I’m really lucky to be here.

Any surprises in store for your performance?

I think people are surprised at how intimate it is when I strip to solo acoustic, it’s quite emotionally intense; that’s always quite surprising, people never expect it . You see a guy on acoustic guitar, you expect chill acoustic songs, but people can get quite emotionally involved with it sometimes. I’m excited to see people’s reactions from it.

Mostly from Birmingham, as that’s my hometown, so a hometown show at Slam Dunk is gonna be a great way to end my week. Get to tour with As It Is as well; a great tour, a great weekend, hometown, chill at the afterparty. Excited for the new site at Hatfield, never been to the old place, but apparently it wasn’t as nice as this one’s gonna be, like a big park. Playing outside’s always amazing.

After Slam Dunk and your festival dates, what’s next for you?

There’s loads of things in the works, it’s been really cool, just keep an eye out. Cool tours, cool shows, cool music obviously; mostly just gonna keep on doing what I’m doing, and just hope people like what they’re hearing. Just spread a good message as much as I can.

I Just Don’t Deserve to Be Loved EP is out NOW!