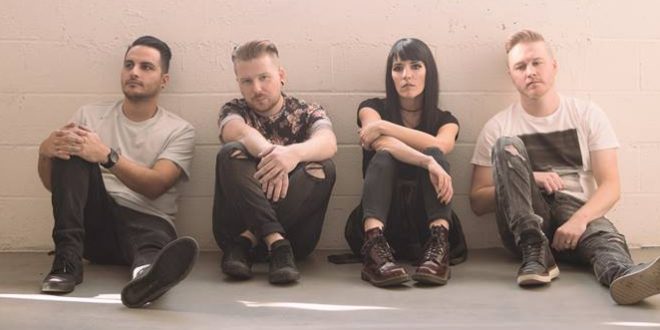 Californian rockers The Material are back after a five year hiatus with their brand new EP Gray States.The Material have been away from the music scene for a little while, so how successful this comeback is beyond their diehard fans is anyone’s guess. This five track record, released on May 18th, is the musical embodiment of dipping your toe in the pool to check its temperature.

Lead singer Colleen D’Agostino describes Gray States as “waiting when you aren’t sure about what you’re waiting for.” I get where she’s coming from; this latest release is short and sweet, but it feels a little restrained.

EP opener “The One That Got Away” sets the mellow tone for the rest of the tracks to follow. The emo via pop punk tone sent me right back to 2010, but D’Agostino’s vocals are gripping and mournful all at once.

“Take Me Back” might be more upbeat in tune, but is as retrospective and melancholy in content as its predecessor. Then, it’s a slight case of deja-vu with “Give Anything,” i.e. more sadness and slow guitars.

“Wayside” brings the tempo much further down with a minimalist take on memory. I would have been bored of this track after the first three songs if it hadn’t been for a beautiful guitar line sprinkled throughout this song. To round off, “Mistakes” brings much of the same from what we’ve already heard, with deep guitar lines reverberating against D’Agostino’s bittersweet vocals.

Fortunately, The Material is comprised of talented musicians and an amazing singer, so listening to this EP isn’t a chore at all. But, if they’re planning on following this comeback up with a full-length album, they might benefit from mixing their sound up a smidge every few songs. For fans of pop-punk and longtime emos, however, this is pretty nice to listen to.

Find The Material on social media:

Gray States is available to buy and stream now!

Freelance arts, culture, and music journalist. Lots of words and some radio. Studying for an MA in Media and Journalism. Trying their best.
@lozreviews
Previous Album Review: Violet Night – Colours of You
Next Gallery: Japanese Breakfast, Radiator Hospital, and Long Beard at Warsaw 05.31.18