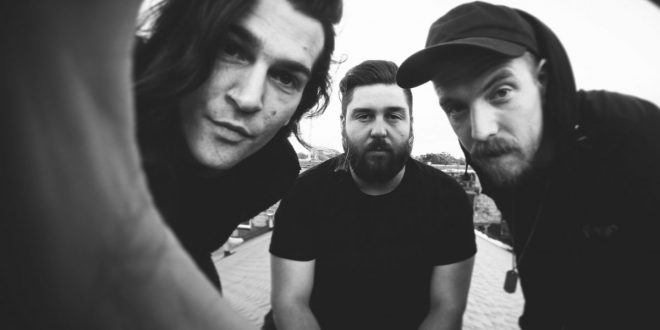 Today, the Southern California trio, Night Verses, premiered their new track “Phoenix IV: Levitation” with Revolver Magazine. The single is the first taken from their forthcoming album From The Gallery Of Sleep – available for pre-order now ahead of it’s June 29th release on Equal Vision Records. Following the release, the band will be heading out on a full US tour in July with Strawberry Girls.

Earlier this year, the heavy post rock trio, shared the news that they would be continuing on as an instrumental band without the vocalist and surprise released their first instrumental music, a 3 song EP, Copper Wasp. While that sort of change up might have knocked a band back a few steps, Night Verses have come through as an entirely different beast, letting each member shine all the brighter.

Now Night Verses are preparing to release their new full length, From The Gallery Of Sleep, redefining what a progressive metal band can sound like, pushing the boundaries, not only without a vocalist, but by bending the sounds that are “generally acceptable” within a heavy record. In the end, From The Gallery Of Sleep sheds much of their metalcore origins putting them ahead of their time as a progressive post rock band. The first single “Phoenix IV: Levitation” is a 9 minute epic, showing off the range accomplished throughout the new album.

Speaking on the track, drummer Aric Improta, says:“One of the main themes attached to the Phoenix is a bird rising from its ashes into a new form of itself and even though it’s a pretty on the nose analogy, we always use the “Phoenix” songs (on each album) as an attempt to raise the bar for ourselves musically. We usually try and include all of our favorite ideas and most challenging passages in that one song. It also acts a personal time capsule, reminding us of what our peak level of musicality was during that cycle.”

Originally formed in 2012, they went on to sign with Equal Vision Records and share the stage with acts such as Converge, letlive., The Chariot and more. While the loss of a vocalist might break other bands, Night Verses’ live show, which they’ve always been highly regarded for, has only grown more intense and dynamic.