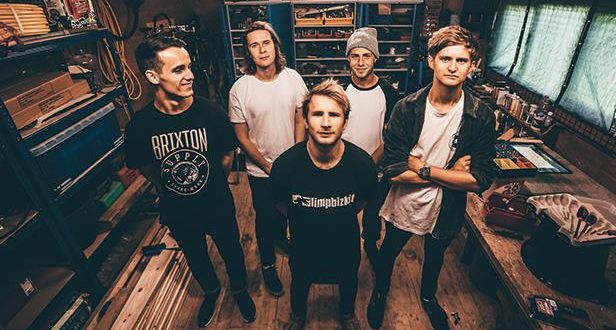 Eastbourne pop-punk band, ROAM, aren’t strangers to Slam Dunk Festival as they entered the first day of the festival in Leeds City Centre. With the release of their 2nd album, Great Heights & Nosedives, we chatted with Alex Adam and Alex Costello, discussing their performance that day, which might have included inflatables, and the possibility of an upcoming headline tour…

What have the band been up to before the festival then?

ALEX ADAM: We’ve been doing a lot of preparation for this show.

AA: Putting a lot of effort into the set and the production for today. We had a show with As It Is last weekend, we did Australia with Knuckle Puck in January, and then Tonight Alive in the UK.

AC: Did a lot of chilling!

AA: Yeah, we’ve done a lot of chilling at home, which is nice for once.

Your most recent album, Great Heights & Nosedives is out now – how’s that been for you guys?

AA: Yeah, it’s good! The reaction’s been amazing, we’ve seen a huge growth since then.

AC: It’s definitely our best stuff that we’ve ever done!

AA: Yeah, I think we feel more confident than ever since releasing that and it really sums up how we wanted to sound as a band, so we’re excited to tour that all over the world now!

AC: We’ve worked with a really great guy, and he helped us with these songs, mold these songs, so that was really cool. It was actually sick to go to California to do it.

You guys have any surprises in store for your performances?

AA: Guest vocals, we got some floating things, got some inflatables to chuck at people.

AA: You gonna whip out a backflip?

AC: Maybe, you may see some skills, or something.

AA: Alex [Costello] is a bit of a gymnast on the slide, so he does backflips.

AC: It’s a good stage, to be fair. Plenty of room for flips. Once I tried this flip that I hadn’t practiced, and it was on the As It Is tour in America, and I had never done it on stage before! I did it, and I ended up flying into As It Is’ guitar boats! It hurt, but I did actually land it in the end. Won’t try that one again!

AA: Looking forward to playing the most, honestly! Just want to get up onto the stage. I think it’s always amazing to come back and see the growth since last time, ‘cause everytime it far passes our expectations, so I’m excited to see that again! I’m here for other bands to, like I want to catch Knuckle Puck – think they’re on now!

AC: So we’ve not catched them today!

AA: But there is loads of great bands and I’m just excited to play really.

Your music video for “Playing Fiction” was released recently – how was that for you and the band?

AC: Yeah, that was amazing! That was a time in the wonderland of fairies and goblins and stuff.

AA: Yeah, it was weird, but we kind of set that one up ourselves, and we went as far as we possibly could with a fairytale theme – there’s still actually a pig costume in the van, and my dog ate the other one! I think the video’s great, it’s one of our better ones so I’m excited about it.

Finally, after these performances at Slam Dunk Festival, what’s next for the band?

AA: It’s all a little bit top secret at the moment, but in the coming weeks, we’ll be announcing a few tours of which, maybe, we might be headlining, because I think we’re ready to step it up and start touring this album around the world with us as the main focus. We’ve supported our favourite bands, and we’re very thankful to have been able to do that.

AC: Now it’s our turn to headline, and it’s gonna be a sick time!

AA: Very excited to take it around the world now, and hear people singing along.

Great Heights & Nosedives is out NOW!