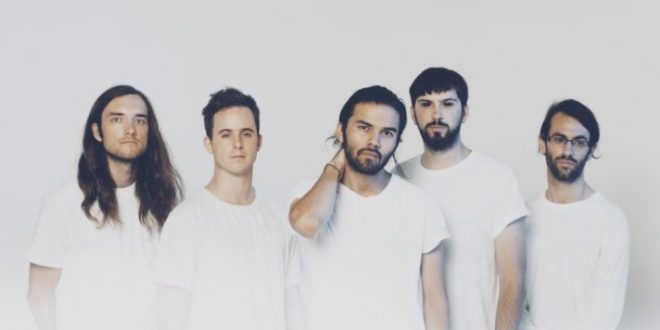 Aussie metalcore band, Northlane are no stranger to the festivals, having previously played at both Download in Donnington, UK back in 2017, and in Melbourne for the first Download Australia Festival. But having been together making music since 2009, and playing on the Impericon Stage on the first day of Slam Dunk Festival in Leeds City Centre, we chatted to Alex Milovic and Nic Pettersen to ask about what they were looking forward to with the rest of the festival, as well as their unique drop-tuning style…

Last time I saw the band was at Download 2017; what have you been up to since then?

Nic: We played a couple of shows at the end of last year around Europe, we did a headline tour, then we went home and just been spending time at home; we actually had some time off!

Alex: It’s been pretty relaxed – we played Download at home as well [Melbourne].

N: Yes, we played the first Australian Download! That was cool, pretty happy. Otherwise, not much.

Your last release was Mesmer, back in March 2017; have you been going into the studio lately for a new one?

N: No, we’ve been working on some new stuff, but nothing too concrete.

A: Like we said, we’ve just been taking some time at home, just relaxing.

N: Little bit of focus on Analog Future, our live album, so that took up the time while we’re at home, collecting all that and then releasing that, so that’s really the main focus we have right now.

You’re performing on the Impericon Stage – any surprises in store for the set?

N: I don’t know about surprises, unless you’ve never seen us before; that’s probably a surprise.

A: This Northlane show, we’re inside today, so we’re in a darker environment that’s more to our element, so if you see us at a festival, come into the uni and have a different vibe! It’s gonna be good!

N: There’s some familiar faces around, people I’ve seen before and played shows with, so as a whole, it’s always nice to come to a festival and see friends and people that we’ve worked with and see different shows. UK has always been very kind to us, so it seems like a good day.

The band use a very unique drop-tuning style; tell me more about that.

A: The easiest way to look at it is if you have a normal 6-string guitar and drop A#. But because we play 7-strings, the lower string is just another F on top. So instead of doing a weird tuning where it’s a drop F#, you can still do all your normal chord shapes in that lower tuning. But then you’d still retain some of the prettier chord shapes because if you take away that 7th string, it’s still A#, so it’s not as low. It was just as an experiment, we played in A# to begin with when we started the band, and then dropped to G#, and then now dropped again. You can just make different sounds but you can still play those older A# songs as well if you need to.

Finally, after your 3 Slam Dunk performances, what’s next for the band?

N&A: We’re going home!N: Just chilling! I think we just announced a European Summer [tour], so we’ll be back in July/August for some festivals and some smaller shows, but in that time between here and then, it’s just going home, relaxing, enjoying some time at home, and then coming back over here really.

Analog Future is OUT NOW! Check out their tour dates below for their upcoming European tour – tickets available through their website!