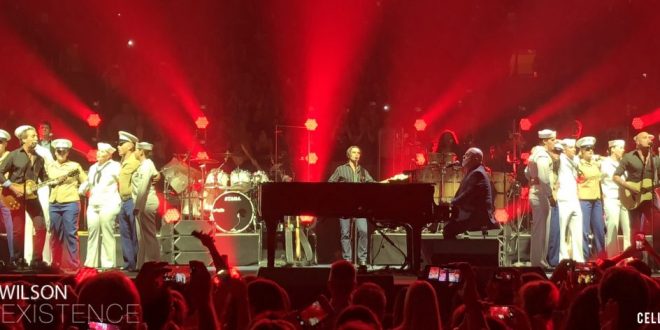 The idea for Billy Joel become a resident performer at New York Cities iconic Madison Square Garden was first proposed in 2014 and four years later, he hit his 52nd consecutive sold out show. This July will mark Joel’s 100th appearance, awarding him the record for the longest standing act to consistently to sell out The Garden.
This longstanding relationship with MSG has landed Joel a franchise position along with the Knicks and Rangers.

Billy Joel, who recently celebrated his 69th birthday on May 9th, opened his show as he normally does, seated at his piano and performing a few songs on his own, before posing a few multiple-choice questions to the audience regarding which songs they’d like to hear. Mixed with his iconic banter, this crowd participation leaves every audience member with the experience of helping construct a unique performance, being every bit involved in the production as was the band itself. Joel would crack jokes between songs and tease with renditions of Led Zeppelin, Beethoven, and Giacomo Puccini before launching into his classic hits. One cover that caught the audience by surprise was Gloria Gaynor’s “I will Survive.” It seemed as though the song was an organic and impromptu addition to the set list and was executed flawlessly with added vocals from Crystal Taliefero.

A unique detail to Billy Joel’s 52nd performance was that May 23rd kicked off New York City’s famed “Fleet Week” celebrations. To honor the troops, Joel invited 14 members of the US Navy and Marines to help sing “Goodnight Saigon.” Every member of the audience was proud to stand and sing along in honor and remembrance of those who have served, both present and past.

The nearly three hour show concluded with a five-song encore, but not before Gavin DeGraw made a surprise appearance to provide vocals on “You May Be Right”. Shaking hands with fans up front, Joel bid the crowd a goodnight to conclude the night’s performance.

Setlist as follows (From setlist.fm)
Miami 2017 (Seen the Lights Go Out on Broadway)
Pressure
Don’t Ask Me Why
Vienna (fan vote over “Just the Way You Are”)
Zanzibar (fan vote over “Stiletto”’)
She’s Got a Way (fan vote over “Everybody Loves You Now”)
The Entertainer (fan vote over “Root Beer Rag”)
Allentown
Goodnight Saigon
Movin’ Out (Anthony’s Song) (Followed by ‘Kashmir’ (Led Zeppelin) snippet)
Stop in Nevada
New York State of Mind
Happy Birthday to You (Mildred J. Hill & Patty Hill cover)
Half a Mile Away (Live debut and followed by ‘I… more )
She’s Always a Woman
I Go to Extremes (fan vote over “Storm Front”)
My Life (preceeded by “Ode to Joy” by Ludwig van Beethoven)
Sometimes a Fantasy
The River of Dreams
Nessun dorma (Giacomo Puccini cover)
Scenes From an Italian Restaurant
Piano Man

Encore:
We Didn’t Start the Fire
Uptown Girl
It’s Still Rock and Roll to Me
Big Shot
You May Be Right
(With “Rock and Roll” (Led Zeppelin) snippet)