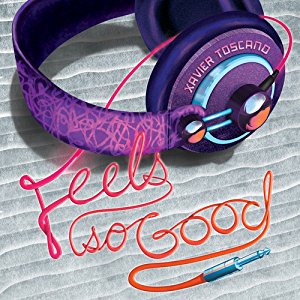 You may not have realized it, but you’ve probably heard Xavier Toscano’s hot new single “Runaway,” from the album Feels So Good, somewhere in the spectrum of pop culture recently. It’s been hard to escape its grasp thanks to a steady stream of specialty radio airplay and plugs from numerous commercial outlets on television and the internet. It’s not often that seemingly everyone is talking about the same artist at once, but when it happens, journalists and labels start to take note. It can easily be confirmed that Toscano is quickly becoming one of the most intensely discussed and followed aspiring pop acts of the last two years, and his newest full length Feels So Good comes just in time to ensure that we’ll be talking about him well beyond this year and into the next.
At his core, I feel like Xavier Toscano is a singer/songwriter with amazing crossover abilities. He would be quite excellent at creatively interpreting any genre of music that you gave him to arrange, but it’s perhaps the most thrilling to see him in this arena: high energy, maximum adrenaline, rhythmic pop thunder. He perfectly captures that sort of intuitive, primal energy which can’t be contained when the bass starts to strut and the drums start to crash. We’re invited to passionately move and sweat to the rip-roar beats like this is our last day on earth, and there’s an underlying primitive, sexually charged excitement that is inescapable throughout Toscano’s music that is as intoxicating as it is unforgettable.
The album opens with a haunting intro track that features a guest appearance from the wickedly talented Raquela that sets us up for the stampeding drums and soulful vocals of “Never Wanna Leave,” a very fitting mood-setter for the record that features an insatiably catchy chorus. We get a taste of lo-fi abrasiveness in some of Feels So Good’s more experimental moments, but never does Toscano make us feel like he took a less than professional approach to this record. In fact, Feels So Good features so many micro sized details and added samples of melody that it could be overwhelming to a listener more accustomed to predictable, insipid pop/rock that this record towers above by miles. Don’t get the wrong impression though; Xavier Toscano as both an artist and a songwriter doesn’t give me a pretentious or megalomaniacal vibe in his means of artistic delivery. In fact, his keen attention to detail is probably the most humbling thing about him, considering the fact that most of his rivals in the California electronica scene leave most of the heavy lifting to artificial intelligence and sloppily programmed soundboard software.
I must say, Feels So Good is a rather welcoming breath of fresh air for me as a music enthusiast, mostly because it’s an accessible piece of cool indie pop that doesn’t try to patronize me or my intellectual capacities as a listener. Instead I feel like I’ve found a truly unique and original artist who not only understands exactly what I’m looking for as a music consumer, but has made sure to be aware of what I’m not looking to hear any more of as well.
Thomas Patton, III

Stephen Vicino is the founder of MusicExistence.com. He created this site to give talented musicians a voice and a way to be discovered.
@@svicino
Previous Gallery: BØRNS at ARC Pavilion in Davis, CA
Next New Age Supergroup FLOW’s self-titled debut album