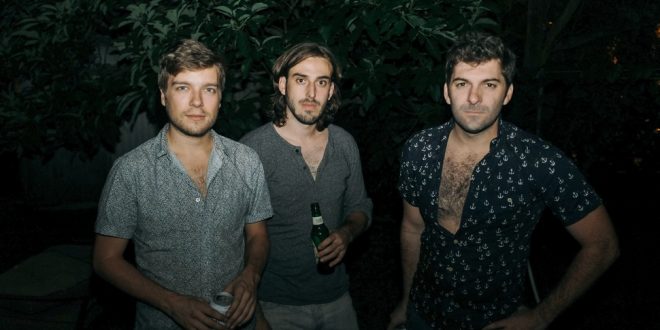 The 405 has shared the new single from Magic City Hippies entitled “Body Like A Weapon”. When talking about the track drummer Pat Howard says, “This track is maybe the side effect of having a few analog synths lying around for the first time. Those sounds inspired this kind of ‘cocaine 80s’ vibe, which is always a fun Miami cliche to play off of, but I think this one got pulled in a few cool new directions for us.”

Lead singer/guitarist Robby Hunter adds, “There’s definitely quite an array of sounds and aesthetics, for what it’s worth, there are smooth Marvin Gaye-style 808s, but then there’s also the trunk-shaking trap 808s later on. Chorused-out Frusciante funk guitars become Tom Morello-style beeps and boops. We even got to throw in the infamous Dean Scream at one point.”

Magic City Hippies began as a one-man band playing for the co-ed party scene on the streets of Miami — serenading the 20-somethings with a mix of old- school hip-hop covers and breezy pop originals.

After months of stealing electricity and stirring up crowds of passers-by with his loop-based setup, Robby Hunter was given an ultimatum by the local police: to cease and desist from street performance or to get a gig at a “real bar.” Finding sanctuary in the neighborhood dive, Hunter enlisted the support of multi-instrumentalists Pat Howard (drums) and John Coughlin (guitar) for a regular Friday night gig (that paid, of course, in free beer).

The trio dubbed themselves Robby Hunter Band and released a self-produced, widely acclaimed debut LP in 2013 entitled Magic City Hippies, which included the beachy Hype Machine-topper “Corazón” alongside indie blog hits ”Hard On Me” and “BUST.”

Encouraged by the international reach and positive reception of their debut, they decided to expand their sound and approach under the better-fitting moniker Magic City Hippies (after the title of their debut LP). In July of 2015, the Magic City Hippies released the Hippie Castle EP, with the lead-off track “Fanfare” hitting #1 on both Spotify’s Global Viral Top 50 and Hype Machine’s popular chart. The EP has accumulated over 10 million Spotify streams to date.

After the release of two follow-up singles, “HUSH” and “Heart Wants” in 2016, the band was picked up by Hippo Campus for an opening slot on a national tour, playing 40+ shows in over 30 states over the course of 8 weeks.

The exposure of the tour brought MCH to the attention of the festival world, with sets at Bonnaroo (2017), Hulaween (2017) and Okeechobee Fest (2018). MCH is currently set to perform at Electric Forest and Austin City Limits later this year, as well as a national tour in support of their new music.

“Body Like A Weapon” is the first single released from recording sessions from winter 2017/2018.