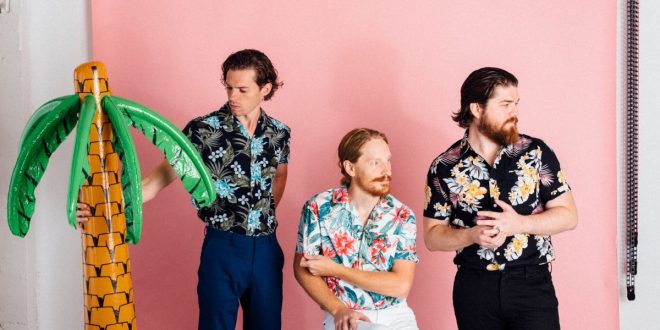 Bubbly synth vibes and Arkansas aren’t a typical pairing, but alt-rock trio Knox Hamilton manage to make it feel as natural as breathing. Brothers Boots (bass, vocals) and Cobo (drummer) Copeland grew up as pastor’s sons in Texas and Arkansas, learning early the palpable power of music in their father’s church. An adolescence of songwriting spun into a fully fledged band with the addition of Drew Buffington, and Knox Hamilton was born.

Defying the typical musician’s path of packing up their lives and moving to Los Angeles, the trio have remained in Arkansas. By scooping up the influence of their childhoods and their passion for soaring melodies, the brothers have produced an altogether new sound that is bright, lively, and undeniably unique. With a focus on driving guitar, shimmery synth breaks, and sincere melodies, Knox Hamilton deftly defies expectations and brings an honest, indie rock sound straight out of Little Rock.

Before Knox Hamilton hits the road in July (dates and tickets here) in support of their upcoming summer EP, Boots Copeland took some time to have a chat with Music Existence. Read on for more about the band’s inspirations, recent single “Trade My Trips“, and, of course, their ideal rider.

Music Existence: You’ve described your new single “Trade My Trips” as a love song to those who put their lives on hold to allow Knox Hamilton to become a reality. Why did that feel like a song you had to make?

Boots Copeland: Different people wrote for different reasons, sometimes when it comes to lyrics you just write what’s on your heart at the moment and sometimes those ideas turn into songs that you feel like might resonate with the people who enjoy listening to your music.

ME: Can we expect a video for “Trade My Trips” in the future?

BC: Sure hope so!

ME: What has it been like to see the fan reaction to “Trade My Trips” and have a song about such a personal experience resonate with so many people?

BC: As a band you put so much stock in what others think of your songs, so any time you get any positive feedback it gives you a sense that you got something right.

ME: Your sound has a fairly distinct and undeniably fun ‘80s vibe. Where did that influence come from?

BC: We appreciate and listen to all kinds of genres of music from a variety of decades, I don’t think we strive for any certain sound, just try to write to our strengths and taste, and what matters most is what fits the song at that moment in time.

ME: Has music always been an integral part of your lives? What motivated the decision to pursue it sincerely?

BC: Growing up in the south, Church is a big part of life. The churches we grew up in placed an important emphasis on music. I’m pretty sure that’s how we were all introduced to making music. I can speak for myself and my brother Cobo (KH drummer) and say that our parents always pushed us to do the music thing for a career if that was what we wanted to do.

ME: What artists and styles would you cite as the biggest influences on your desire to pursue music?

BC: The Killers Hot Fuss album is collectively probably the most important album by the most important band to us as far as influencing our style/vibe/career decisions. There are many obviously but that was when we all said, “Oh, of course, we can toootally combine our love of synth pop with groovy beats and rock n roll duh!”

ME: Many bands end up moving to Los Angeles or Nashville once they become established, but you guys have remained in Arkansas, including recording your songs there. Has there ever been a desire to make that move? What keeps you in Arkansas?

BC: It’s very affordable to live in Arkansas comparatively, and our families/support systems/inspirations are here.

ME: You’ve been together for a few years, and in that time have been able to tour with some pretty incredible acts, as well as play festivals, and headline your own tours. What are some of your favorite touring memories?

BC: Favorite touring memories include Hangout Fest, Firefly (got to see Paul McCartney live and sing “Hey Jude” with 80,000 Beatles fans) and in general meeting some lifelong fans/friends in some of our favorite cities along the way.

ME: Touring can get pretty tedious for every band; if you guys had unlimited resources for your rider, what would you request?

BC: Massage chairs, scentsy candles for a majority of the green rooms, jalapeño veggie straws etc etc etc. We could fill 5 pages of rider at this point.

ME: You’ll be releasing a new EP this summer. What does that writing process look like for Knox Hamilton? Do the melodies or lyrics come first, or is it a total grab bag?

BC: Grab. Bag. Sometimes one of us will bring a melody or even vibe of a song to the group, and other times lyrics will come first and we’ll try to fit music to that feeling

ME: If you had to pick one word to describe the new EP, what would it be?

BC: Probably…transcendent. Either one of those words.

ME: What’s the most exciting part of releasing new music?

BC: All of the money. (I think most bands and listeners alike will know that’s a joke). In all honesty, it’s seeing the reactions of the people who love your music.

BC: Fallon, SNL, and other tv shows on other networks besides NBC. And to keep us humble, a small club tour in the summer/fall.

ME: What are some songs you’ve had on repeat lately?

BC: “OTW” by Khalid, “I Like That” by Janelle Monáe, new Post Malone album, “A Good Night” by John Legend, “Beyond” by Leon Bridges.

I write about music and live shows and other fun things. Strong feelings about pugs, Halloween, and burritos. Currently zooming around northern California, with frequent stops in LA.
@missdanajacobs
Previous Gallery: Candlebox at Pointfest in St. Louis, MO on 5.12.18
Next Hold On Hollywood Release Official Music Video for “Save Me”