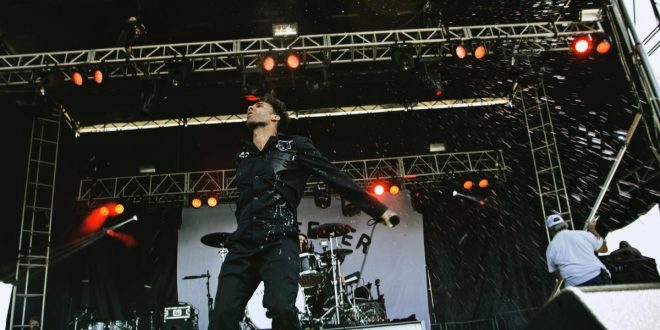 After two days of nonstop rockers going hard in the Florida heat, day 3 ended a little earlier, but not without some amazing artists like Bullet for My Valentine, Thrice, The Fever 333, and Wolf Alice hitting the stage. With another day of clear blue skies and temperatures in the mid 80’s, fans were excited for the final day and add to the book another incredible year at Welcome to Rockville!

The buzz in the air started early as word began to spread about The Fever 333. There has been a fever coming for a while now and no one knows how to stop these three men from taking over! As a wave of people rushed over to the River Stage, a lone male figure dressed in a black jumpsuit and black mask stood in front of a white sheet on stage. As he stood there, a recording of Donald Trump’s bigoted remarks towards Muslims and people of color and old recording from KKK members at rallies spewing hatred played. Tension built, the curtain dropped and Jason Aalone Butler (former member of Letlive) ripped off his mask as the band ripped right into their song “Burn It”. The message is clear with The Fever 333, there is injustice and steps in the wrong direction being taken in the world and they are here with a message with lyrics based around Community, Charity, and Change. As the crowd grew wild Butler became so full of adrenaline that he climbed up high above the stage where he practically had a bird’s eye view of the crowd! After the song ended he said “You climb up these things knowing how to get up, but never thinking how to get down.” The Fever’s energy cannot be topped; those used to LetLive should not be surprised though, Jason has always been one of insane antics while performing and the band delivered nothing short of it. The band did make one thing clear to the audience, “We are not here to divide, and we are here to create a space for free speech. You have a safe space with The Fever 333”.

Over at the Metropolitan Stage we had Thrice performing their set consisting of 8 songs including favorites like “Black Honey” and “Hurricane”. Their entrance may not have been as dramatic as some of the other acts, but as the second song came on they began to deepen the chords and metal which the crowd enjoyed. Thrice will be touring overseas for some major European Festivals like Download Festival so be sure to catch them!

Bullet for My Valentine brought the metal to the rock show over at the Monster Energy Stage with new band mates Jamie Mathias on bass and Jason Bowld on drums. Fans were not afraid to show their love during their new single “Don’t Need You” as multiple crowd surfers took to the sky during the band’s first song, one even had an inflatable raft! Lead vocalist Bullet Matthew Tuck smiled out to the crowd as the band led into “Over It” and “Your Betrayal” which got everyone moving. Although Tuck admitted his voice was wrecked, that did not stop him from taking the crowd back to the early 2000’s with one of their classic hits “Tears Don’t Fall” from their album The Poison which had the entire audience clapping in the intro for the band. Despite having a change in new members, Bullet for My Valentine has not changed and continues to put on a heavy metal show that we have come to expect and love from them.

Back over at the River Stage was Britain’s hottest new indie band Wolf Alice that took the crowd by surprise. This was my first time seeing the band and was expecting a softer set, but instead was treated with a hardcore punk with a twist of pop. Lead vocalist Ellie Rowsell can be described as an angry little pixie with the voice of an angel, both warming yet sends a chill down your spine. The bands performance flowed effortlessly between each song and had me hypnotized to stay til the very end. They are now some of my favorite new jams and would highly recommend them, kind of a religious experience.

Overall Welcome to Rockville was another great year with three days of beautiful weather, a variety of newer and older music, and many friends. Danny Wimmer and his crew put on an incredible lineup, all logistical problems went off without a hitch and everyone is already anticipating what 2019 will bring. Thank you Rockville, until next time! 😛

Previous Interview: Richie Ray of The Stars Revolt
Next Gallery: Bullet For My Valentine at The Wellmont Theater in Montclair, NJ 05.15.18