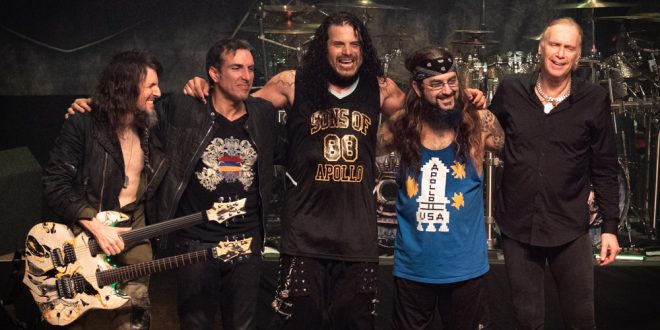 Progressive rock supergroup Sons of Apollo is in the middle of their second United States tour in support of their fantastic debut album, Psychotic Symphony, which is as wonderfully diverse and polished as the musicians who make up the band (see full gallery below).

And the fact that the polish easily translates from the album to live performance is no surprise given that Sons of Apollo –  Mike Portnoy (drums), Billy Sheehan (bass), Derek Sherinian (keyboards), Jeff Scott Soto (vocals) and Ron “Bumbelfoot” Thal (guitar) – is comprised of five players who are all long time pros with extensive musical pedigrees.

With a no-frills stage setup, the Sons of Apollo ensured that the focus at the Arcada Theatre in St. Charles, IL. (just outside of Chicago) would be on their performance, which was tight and top notch. The band performs all songs from their debut, plus some covers…including the theme from the Pink Panther movie, and solo spots as well (see setlist below).

There are a few remaining US dates over the next week, and then the band takes a month off before heading to Europe, Japan, and elsewhere for dates from June – October.

Bradley Todd is a Chicago based concert photographer who also shoots people (only w/ cameras), events, places and things
@@bradleytphoto
Previous Interview with JOYOUS WOLF at Welcome To Rockville 2018
Next VISTA Get Dark with New Single “Witch Hunt”