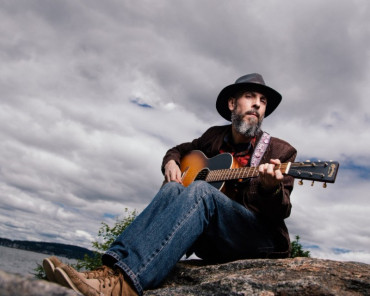 Hudson River serves as Greg Jacquin’s reemergence to the music world. After life’s interruptions like family and serving in the police department, Jacquin’s meaningful lyrics have flashes of both Woody and Arlo Guthrie. In true musical form, the son of a Cuban immigrant presents a very-well done Americana album. Hudson River is an outstanding musical journey.

Jacquin’s melancholy approach at times can feel heavy. The lyrics weigh you down. In the song “The Station” (track one; the seventh track is “The Station (String Mix)”), Jacquin’s earlier influences like Cat Stevens and The Beatles shine through. While there’s a tinge of pop flavoring, this track is folk and Americana at their best. Jacquin seems to master, with his brooding voice, a subtle, somber beauty. Jacquin doesn’t show much range in “The Station” and waits until “Yesterdaze” and “Hopeless Entrance” to show a different emotional side to his vocal delivery.

The album title itself, Hudson River, seems to fit well with the tracks. Jacquin leaves nothing back in his loneliness, anger and heartbroken prose. Just like a river, the days can be murky and dark, and other times, clear and clean. His influence from the Hudson River Valley is evident. He may not out right call out Mother Nature, but the strings and the percussions percolate along as if you were cascading down the water.

“Floating” is a standout track. The strings (violin) are airy and feel like the sun hitting your face. It’s like being outside or camping and that feeling of trickling along down a new path. Jacquin follows that momentum into “On The Moorings.” The latter is a perfect combination of Cat Stevens’ influence mixed with Pete Seeger, Judie Collins and Malvina Reynolds.

I really liked “Scratches & Bridges.” It’s a lovely track with bright trumpets meshed with prose. Jacquin channels an almost angrier vocal delivery in the song “Yesterdaze.” It’s surprisingly darkly fun. This one will get stuck in your head for days. You get the sense he writes a lot of his lyrics at his lowest – as if he were in a fog, but there’s so much clarity to them. It’s revealing and disturbing all at once.

The music bed to “Hopeless Entrance” is moving and poignant. The lyrics are very to the point. I would worry if someone I knew had this song on repeat – it’s a very depressing track. Jacquin sings about being in bed all day, and seeing stuff on Facebook. I think we can all relate to seeing other people posts on Facebook that depress us.

Overall, Greg Jacquin still receives high marks for a strong Americana album. Hudson River is an artistic triumph. Even though it touches on the morose and can definitely put you in a sleepy headspace (you might even stay in bed all day!), you can’t deny Jacquin’s artistic vision and influence to feel. You feel something. You won’t walk away feeling energized, but you will be contemplative and relaxed. The use of violin with his acoustic guitar is breathtaking. All the tracks had subtle but memorable music beds.