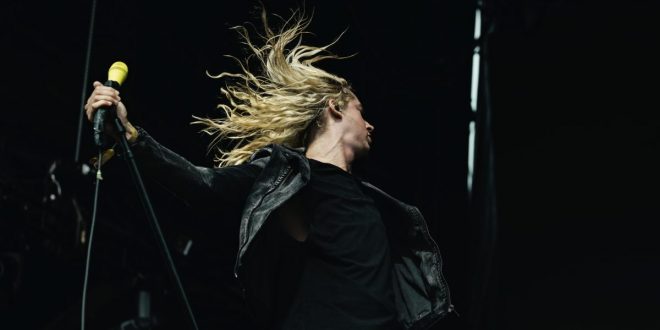 It’s that time of the season to rock out in Jacksonville once again! This year’s Welcome to Rockville brought many artists together, old and new for one incredible weekend at Metropolitan Park and part of the Everbank Field. Three Stages with more than 50 bands and a crowd with over 90,000 rockers all weekend long! We definitely started off the weekend strong with headliners on day one like the legend himself Ozzy Osborne, Godsmack, Five Finger Death Punch, The Used, and Underoath just to name a few incredible artists.

I love shooting festivals because I always end up discovering a new band to love, and Bad Wolves is where it’s at.  Right at the start they set the bar high while dominating their set. I just heard of the band with their Cranberry tribute “Zombie” cover, which made them the first metal band to make #1 on Mainstream Rock Radio in the US! Be sure to catch them on their upcoming “What’s in Your Head Tour” this June!

Next we had Underoath and The Used playing back to back on the Monster Energy Stage both full of crazy hairflips, mic throwing and my personal favorite the throwing and spitting water. Parkway Drive also was bringing some major heat during their set at the Metropolitan Stage and the crowd was going wild! Before Winston and the boys even stepped on stage security and the crowd were getting pumped while having a contest on which side of the crowd was the loudest.  Despite the Florida sun all the bands gave it their all and you could tell the crowd was giving it right back!

Things really started to pick up early in the evening when Halestorm took the stage with powerhouse singer Lzzy Hale opening with “Love Bites (So Do I)” off their The Strange Case Of… album. As the only female fronted act on Friday’s line up they had their work cut out for them. As usual they ripped through their set showing the power of Hale’s vocal range. Lzzy did confirm at the festival that fans should expect some new music coming this summer!

As the sun began to set the crowd became fired up with the anticipation of Godsmack taking the stage. With the sky filling up with pyro, sonic booms, and their entire set of hits, this was a rush from start to finish. Opening with “When legends rise” & “Eye of the Storm” off their latest release the boys laid down an incredible set filled with an even mix of old and new music! Aside from the incredible pyro and the rotating drums, the crowd was treated to snippet licks including “Beast boys “So what cha want”, Metallica’s “Enter Sandman” and Led Zep’s “Moby Dick” This all with Erna dueling Shannon Larkin on the drums and a crowd surfer dancing in a gigantic plastic beach ball rolling atop of the crowd.

To close out the night of Day 1 at Welcome to Rockville was veteran rocker Ozzy Osbourne, of 69 years young. Walking out to the stage with thunderous applause from thousands of his adoring fans, young and old he quickly announced “I’ll never retire, I’m not F*****g going nowhere!” Officially kicking off his No More Tours 2 in reference to Ozzy’s 1992 “No More Tours” jaunt which at the time was meant to be his goodbye to the road. This heavy metal legend said in a statement “I’ve been extremely blessed to have had 2 successful music careers. I am looking at this final tour as being a huge celebration for my fans, anyone who has enjoyed my music over the past five decades. Even though he doesn’t obviously jump around running nuts as much as he used to, he showed a great amount of energy on stage and overall sounded incredible. May be due to not only decades of performing but also a band that pushes his familiar songs to another level. “War Pigs”  a song dating back to the 1970’s, during Osbourne’s time with Black Sabbath, got a supercharged treatment featuring a drum solo, a massive singalong, and a long guitar solo where Zakk Wyldye wondered into the crowd and played behind his head. Overall and incredible first day!