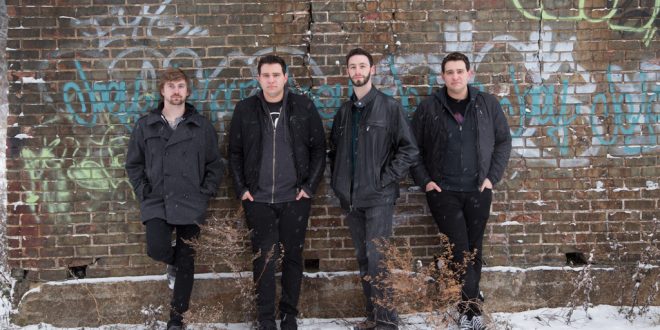 10 Questions With: Break Out Day – New Album out NOW!

Break Out Day was started by identical twin brothers Andrew and Jason Weisbein in the summer of 2009 in the village of Roslyn on the North Shore of Long Island, NY. Influenced by artists such as blink-182, All Time Low, Fall Out Boy, Simple Plan, and Angels & Airwaves, Andrew and Jason spent the next few years writing original music and playing local shows. In May 2013, after filling in for a couple of shows, Perry Dornbush joined the band as their full-time drummer. They performed as a three-piece group for a while, but were eager to acquire a fourth member to serve as a permanent lead vocalist and rhythm guitarist. After adding a new member to fill that slot, the band hit the studio that summer to record their first official release. In September 2013, the band unleashed its sound in the debut EP “The Nights That Made It.” After the departure of that 4th member, the band spent three years searching and auditioning several candidates to fill that role. The band officially added Brandon Wimberly as its fourth member in November 2016. Now with a solid, four-member lineup, Break Out Day is performing, writing, and recording consistently all around the tri-state area.

2. How did Break Out Day first come together? Is the band still all original members?

Andrew & Jason formed the band in High School, Perry Joined in 2013 and Brandon joined in November 2016 after we parted ways with our original lead singer/rhythm guitarist.

We played The Knitting Factory in Brooklyn last April and that was a really cool venue to play and important for us. But, I think we all feel our “breakout gig” is yet to come.

4. What does it take for band to stand out in a music environment such as Long Island? is the local scene primarily alternative/pop punk?

It’s important to engage with the crowd and make an impression as people first and foremost. That’s important no matter where you start out. Also, we’ve seen the Hardcore and Pop Punk genres making a comeback on Long Island in the past few years.

5. What should people expect from your live performance when coming to see Break Out Day?

They should expect to see a band that works really hard to put on the best show possible and also see that we have a lot of fun doing it. We rehearse diligently and meticulously no matter when or where the show is.

For our first EP it was just Andrew and Jason, now it’s everybody.

We’re releasing new music and we’re going to be playing a lot of shows.

Andrew & Jason – Fall Out Boy at Jones Beach on the Honda Civic Tour 2007.

Perry – Phil Collins at Madison Square Garden when he was either 9 or 10.

Andrew & Jason – It’s hard to choose one band, but blink-182 is definitely our biggest influence because that band completely changed our lives. We were drawn to not only to the music, but the band members and how close were and how much fun they had playing music.

Perry – Led Zeppelin because it got me to pay distinct attention to the drummer and hearing that band around 12 years old completely changed my outlook on drums and music in general.