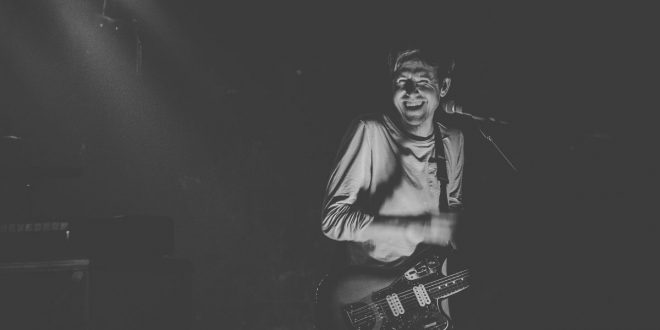 Gallery and Review: Lydia at Outland Ballroom in Springfield, MO 4/24/18

On April 24, indie rock band Lydia closed out their spring tour in Springfield, MO at the Outland Ballroom. The Phoenix natives spent a two month stretch on the road with Moose Blood. This was an intimate headlining show to kick off the era of their upcoming album Liquor, which is set to release July 13.

The set opened with the marching beat to “When It Gets Dark Out,” and the crowd immediately moved to the beat. A colorful palette highlighted the band for “Riverman” including rays of orange, green, and blue. Tracks from Illuminate surfaced, and the audience sung their hearts out with the band. Lydia was elated that a small town they’ve never been to was showing them mad love. Front-man Leighton Antelman admitted, “I’ve been slightly under the weather, help me out,” and the audience delivered during favorites “I Woke Up Near The Sea” and “Hospital.”

“This is fucking cool. Y’all are partying…We appreciate that shit,” continued pianist Matt Keller before introducing their new single “Goodside.” The crowd danced within the ballroom underneath the orange lights. “When you play somewhere you’ve never been, you never know what to expect.. You guys made it worth it,” Antelman said as the band continued to thank the crowd for choosing to spend the night at the venue.

A delicious cover of Outkast’s “Ms. Jackson” made its way into the set list, all in the style of Lydia. Slow tempo compared to the original, but the cover was done tastefully and full of life as Keller joined Shawn Strader on the opposite side of the stage while singing along. The night’s celebration continued with tracks “Knee Deep” and “This Is Twice Now.” The audience bobbed along to the strong snare drum, and when Antelman faced the mic to the audience, he was not disappointed. The smiles remained constant throughout the night, closing the set with “Past Life.”

Despite the crowd efforts for an encore, the hour-long set called for an end. Lydia connected with fans throughout the ballroom, hanging out, singing merch, and just fully taking in and enjoying the last night of the tour.