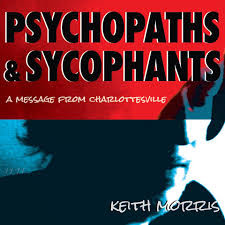 2018 has seen a lot of politically-driven records emerge, but few offer as melodic and precisely-crafted artistry as Psychopaths & Sycophants, the new album from alternative singer/songwriter Keith Morris and The Crooked Numbers. Here, fans of pop, rock, folk and country can find much solace amongst the diverse tones and expansive soundscapes that the band has to offer. Less a political declaration of war and more a commentary on the perceived status quo of our society, Psychopaths & Sycophants contains down all of the necessary attributes to make an incredible rock album. The lyrics are self-aware, but not intrusive and judgmental, the guitar parts seem to blend directly into the keys without becoming complacent, and there is a lasting emotion that exists long after listening to the album all the way through.

There hasn’t been a lot of hype around the folk music community in recent years, as hip-hop and heavily synthesized post-pop has begun to reign supreme over commercial listeners’ taste, but the folk scene itself has been far from dead. A devoted disciple of the legendary Leonard Cohen, the Charlottesville, Virginia based singer/songwriter, who proudly describes his sound as modern Americana, is not fazed by the changes in music trends. Rooted in the plain, simple ethics of standard folk music but driven by a vision to expand on the genre, perhaps Keith Morris’ greatest talent is his knack for creating a mood before he even starts to sing. The Crooked Numbers (which consists of Jen Morris, Tom Proutt, Bud Bryant, Stuart Gunter, Davina Jackson and Davita Jackson) are by far one of the most in-sync backing bands in the business today, as displayed so prominently on tracks like “Canebreak,” which drifts down the lonesome highway like a tumbleweed in the wind. But it isn’t all slow going folk ballads here; the title track carries with it all the dusty danger of a smoke-filled jazz club, and never deviates from the overall heat of the record (if anything, it turns the temperature up by one hundred degrees). Don’t be confused though, this is a great folk album in its own right, with “The Narcissist” being one of the more stand out moments for coffee house dwellers.

In its entirety, Psychopaths & Sycophants is a superior introduction to Keith Morris’ unique style for audiences unfamiliar with the veteran singer/songwriter’s work. Much like his critically acclaimed full lengths Songs From Candyapolis, Love Wounds & Mars, and The Dirty Gospel, Morris’ depth of introspection and sonic exploration are impossible to contain on Psychopaths, but this particular album feels special considering our current political climate. If there is one thing listeners can universally take away from this record, it’s that Americana never really died, it just got stronger beneath the surface. No matter what your ideological persuasion, you won’t be able to deny that Keith Morris is making American music great again with his somber, heartfelt songwriting.

Stephen Vicino is the founder of MusicExistence.com. He created this site to give talented musicians a voice and a way to be discovered.
@@svicino
Previous Gallery: Matt & Kim at Ace of Spades in Sacramento, CA
Next A Delicate Motor Sign to SofaBurn Records