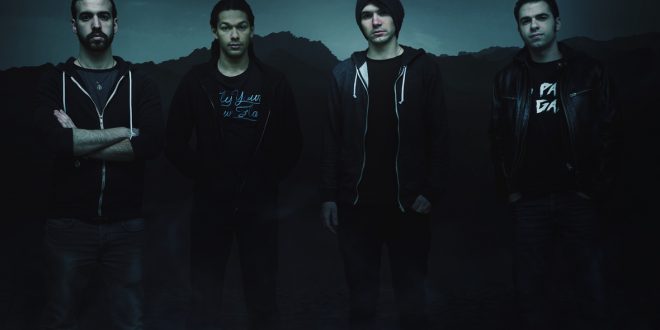 Insolvency Release New Music Video For “Antagonism Of The Soul”

Metal band Insolvency have released a new music video for “Antagonism Of The Soul“, the title track from their recently released album. Blending progressive riffs, upbeat drumming and melodic breakdowns, the song showcases to listeners what Insolvency is all about.

“The song is about the feelings you feel when you’re acting the opposite of what your conscience tells you to,” says Bruno Blackstard, the guitarist of the band. “When unconsciousness controls you, it cause damages to yourself feeling split and fighting against yourself. The video illustrates exactly that with the classic dancer and the fire dancer.”

Watch out for upcoming tour dates from the band and stream Antagonism Of The Soul on Spotify.

Formed in 2012, French metallers Insolvency have spent the last five years furiously building a name and reputation for themselves across their homeland with their energetic metallic assault.

The band have appeared at various festivals across France and Luxembourg. Smashing stages with the likes of Napoleon, No Return, Smash it Combo, Melted Space, Atlantis chronicles, FRCTRD. In 2015, guitarist Bruno Blackstard was selected to play alongside Children of Bodom maestro Alexi Laiho in Helsinki during the 100guitarsfromhel Festival.

The band hit the studio in 2016 to record their debut album “Antagonism Of The Soul” in the UK with Jim Pinder and Carl Bown (Bullet For My Valentine, While She Sleeps, Machine Head). The result is a whirlwind of Blackstard & Valentin Gondouin’s elastic guitar work, soaring melodies and drummer Mickaël Tamario’s frantic assault; all pinned together by the double vocal barrage of Gondouin & bassist Pierre Challouet.

Having signed with French label Send The Wood, with their album being distributed through Seasons of Mist, with a stunning debut album in tow and a steadily growing tour schedule; Insolvency are gearing up for a busy eighteen months. Young, passionate and full of potential members.

Tags "Antagonism Of The Soul” Insolvency