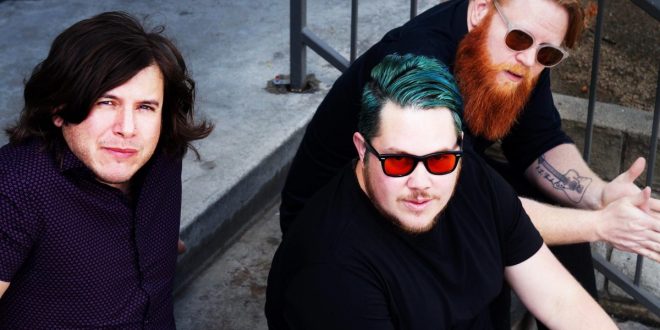 So-Cal based indie group Fellow Robot have just premiered their new single “Clone Baby” over on New Noise Magazine. Lead singer Anthony Pedroza had this to say about the meaning behind the song: “It was written while my wife was pregnant with our second child Desmond. Our first son, Orion looks very much like me, so I didn’t want no clone baby. I brought the structure of the song to a session with Luis and Jon and said ‘Jon, if you can write the lyrics for the bridge, you can sing them on the track.’ A couple hours later ‘Clone Baby’ was written and recorded with Jon, Luis and I knocking out the lyrics and instruments. Mike later put some epic guitar on the track that was very Pixies-ish with his staple Jaguar.”

“Clone Baby” is featured on the band’s forthcoming debut album The Robot’s Guide To Music Vol. 1 which will see a release on June 29th. The album is a concept record, and the first part of a three part album series that explores a future where artificial intelligence has reached a pinnacle, and robots begin to document and chronicle humans and the music they make. The album was a collaborative effort between Pedroza, drummer Luis Renteria, and friends from the local Long Beach music scene.

“[The Robots Guide To Music] was a really fun and amazing body of music to record,” says drummer and main collaborator Luis, who also performs as “Ringo” in Beatles tribute band Britain’s Finest. “We worked with some of Long Beach’s best musicians and it was always a treat to be in studio, have a drink or two, and share stories. The recording part was a breeze—when you have musicians that know what they’re doing, all you really gotta do is set up a mic, and let them go at it. We actually recorded 30+ songs (the rest for Volumes 2 and 3), so there was a lot of time in studio.”