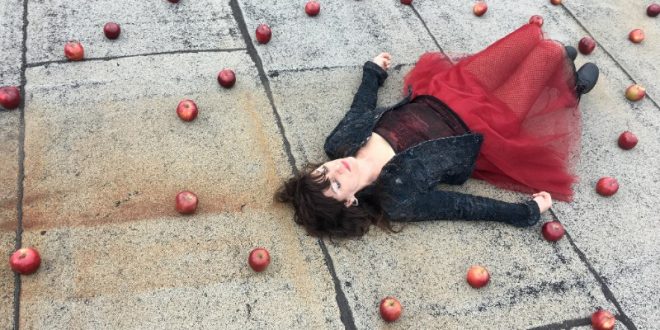 Brooklyn’s Castle Black are not the kind of band that toils for years over new material. With no lack for inspiration, their catchy brand of grunge-inspired post-punk rock promises songs that are catchy, emotive, and always memorable. Today the band releases a new gem, with their music video for “Broken Bright Star” which premiered on Kill the Music earlier this week. The track comes off Castle Black’s EP Trapped Under All You Know, released last August, which received critical acclaim and praise from both fans and press alike. Cranking out new content left and right, the band has a new EP coming this summer, alongside non-stop tour dates – and Castle Black has no plans of slowing down.

Filmed and directed in Brooklyn, NY by Jeff Allyn Szwast, the theme for “Broken Bright Star” appears to further explore the group’s affinity for spells, dark magic, and pagan-inspired rituals, which is evidenced by their previous visual offering for “Seeing In Blue”. A long time collaborator with Castle Black, Szwast also directed and filmed the band’s 2016 video for “Dark Light”. In similar fashion, “Broken Bright Star” once again showcases Szwast’s keen and artistic eye for composition, lighting, and mood. The continued collaboration also provides a certain degree of aesthetic continuity between videos, which allows for both Szwast’s and the band’s unified creative vision to come full circle. Szwast commented  on how sharing common interests and creative concepts helped to fuel the collaborative process, “I love working with Castle Black, because I feel like we get to make these fun, narrative mini-films. Leigh and I have similar tastes in aesthetics and themes, and all of us enjoy infusing the work with a certain amount of 90s head-nods, as we all draw a lot of our early influence from that era.”

Szwast’s use of mysterious imagery and dark lighting lends itself perfectly to the tone of the music which seems to forebode the arrival or return of an ominous and unwanted force. Lead singer and guitarist Leigh Celent’s powerful vocals shine brightly and her effortlessly cool snarl projects the melody with a Courtney Love level of confidence. When asked to weigh in on the process of filming “Broken Bright Star” Celent shared, “Jeff’s style is super artistic, and his shots are all beautifully executed, and that’s how I envisioned the look of “Broken Bright Star”. Very beautiful and dramatic. We specifically planned this video for winter, as I wanted the atmosphere to match the song, just very stark and bleak and cool feeling. We oddly got one of the warmest days in January for the shoot, which was an awesome bonus, as we were outside pretty much all day. Even though it wasn’t super cold out, lying down on the concrete for the aerial shots definitely got cold quickly!”

Castle Black will celebrate with a video release show at The Well in Brooklyn this Friday, April 27, joined by Mora Tau, The Judex, and Bloody Your Hands. If we’ve come to learn anything about this band since they broke onto the scene, it’s that these promising grunge-rockers are always cooking up something brilliant in their sonic cauldron and we can’t wait to see what bubbles to the surface next. With recent time spent in the studio, the band is preparing to release a fourth studio EP, The Gods That Adored You, this summer. It was recorded by Michael Abiuso (The Venetia Fair, Kiss Kiss, The Gay Blades) at Behind the Curtains Media studio. The band called upon the notable ears of legendary engineer, producer and musician Mark Plati (David Bowie, Prince, Spookey Ruben, The Cure, Duncan Sheik, etc) to mix a number of the new songs, with additional production. Mastering was completed by Jamal Ruhe, of West West Side Music.

Previous Andrew W.K. Performs “Music Is Worth Living For” on CONAN || US Tour Dates Start This Week
Next “It’s okay to not be okay” – An Interview with lovelytheband