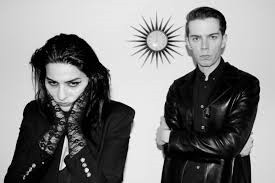 Vowws are a duo from Australia, residing in LA, on tour now in the US, with a new full-length album release – Under The World, available on all digital streaming services and on vinyl on April 20th, via Anti-Language Records in the US and Weyrd Son Records in Europe.

Under The World was produced and mixed by duo Matt & Rizz, and mentored and engineered with timeless influence by Kevin S. McMahon (Swans, Titus Andronicus) at his New Paltz (NY) studio. They’re all responsible for a thing of equal beauty and brash that don’t come together often enough anymore.

“You Never Knew” is as good a place to start as any, but the track order isn’t necessarily important with such a variety of good stuff. However, this does get you out of your seat and pumping air for more from this talented duo. This opening track blends some of the garage and surf factors to be found on the album, with a romantic feel over it that seals the deal and keeps it inside your head. “Esseff” is the name of the next song and it’s a different track in every sense of the imagination, with a full on modern pop track that doesn’t revisit any clichés of the past. It’s probably the most unique moment on the album.

“One Or The Other” gets back to the mainstream with a pop song that showcases their voices together in a much bolder way, with a much bolder track altogether. There’s no turning back after this track, as the ride just gets better and better as it goes. “Burn” takes it down a speed and leaves the thinking to art rockers and musicians to admire as it sizzles away in groovy slow motion as it gives birth to more of the same on “Structure Of Love.” The boundaries are wider on this track, but you feel that coming on from the one before it.

The album all feels very western at this point, so “Wild Wind” is there to break up some of that and get another groove going with one you can dance to even though it’s still essentially rock music. Everyone turns in jubilant efforts on this album, and their delivery of this song is no exception to that rule. The same of which can be said about “Agents Of Harmony” which turns out to be more than meets the ear on the first go around. It could be the sleeper track of the entire album if looked more into the effects of, which are medicinal at times with some tasty grunge inflections.

“Inside Out” gets back to a rapidly-paced atmospheric sound that blends that romantic quality they have with it. This is another hot spot indeed, with a track just about anyone can appreciate. Classic adult contemporary meets modern techno-pop at its finest. Speaking of fast, they go even harder on “Forget Your Finery” with another incendiary mix of post 70s genres. Neither “Charm And Demand” nor “Game” lose any steam in the grand scheme of what this album is packing, as they meet with the same approval, as do Matt & Rizz themselves. A duo that define a force to reckon with.

Stephen Vicino is the founder of MusicExistence.com. He created this site to give talented musicians a voice and a way to be discovered.
@@svicino
Previous David Hopkins – Overlook
Next Roo Panes announces new album ‘Quiet Man’