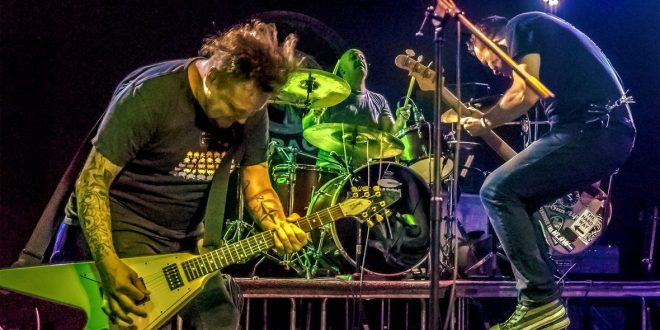 Following the strength of their inaugural music video, “The Claw,” Seattle, WA based Punk Rockers The Finger Guns have announced the pre-order of their fourth album and debut vinyl release, Sasquatch.

“As a working band, We have drawn a line and are in this to win this. We have thrown down a great sounding album, wrapped up in some amazing hand-drawn artwork, and pressed on rad antifreeze green vinyl and we are really excited to share it with you.” – THE FINGER GUNS

Authentic to the Northwest music scene, The Finger Guns are here to rock your proverbial socks off with their organic, farm-to-table, free-range style of punk and roll.

Armed with musicianship and passion, this three-piece band leaves it all on the stage every time the amps get warm. Their high-energy performances are unpretentious, witty, and have been making crowds move at clubs and festivals all around the Pacific Northwest the last seven years.

The band’s influences bring out songs that have a sensibility that spans decades: short, fast and sweet punk n’ roll assembled from bits and pieces of early 80’s punk, 90’s angst, 00’s irony, and even a dash of country here and there.

The Finger Guns have released three albums to date: A Double EP, The Bigfoot EP, and Yeti. The band is eagerly awaiting the release of their vinyl debut, “Sasquatch”, which is launching April 21st, 2018.

Pressed on beautiful antifreeze green colored vinyl, and hand numbered and limited to a run of 300, the album will be available in various retail stores across the Pacific Northwest as well as online. Pre-orders for the album can be made at https://thefingerguns.bandcamp.com/album/sasquatch.

Connect with THE FINGER GUNS online: