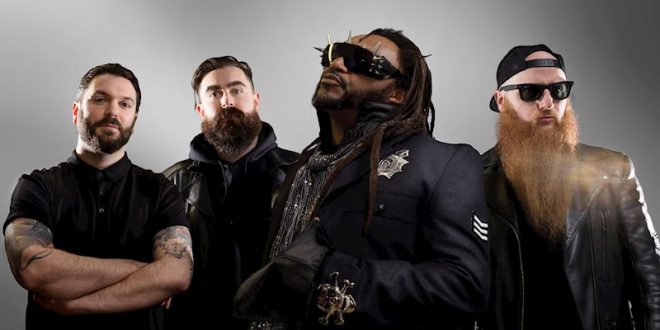 Skindred began their ‘Ragga Metal’ saga way back in 2004 with their debut LP Babylon and have followed this up by some big albums including their most recent records Kill The Power and Volume.

On 27th April, the Welsh ragga rockers will drop their seventh album ‘Big Tings’ and are risking quite the turn in sound with the album. A bass-heavy, funky sounding album replaces the shattering riffs and string distortions from previous full lengths.

The opening track of the album is the album – titled track, Big Tings, kickstarts the album perfectly and gives a great insight as to what to expect from the rest of the album. The track is bass heavy throughout and the instruments have a bit of a Royal Blood influence running through the track, with of course Benji’s vocals to swing my opinion totally out of the park. The track is incredibly catchy with the slightl touch of repetitive lyrics in the chorus and would go well for radio play.

That’s My Jam is the second track on the album, and the first time on the album where we are exposed to the reggae aspect of the band and it is incredible. Again, catchy chorus’ with great reggae style vocals from Benji and jaw dropping drum fills.

The third track on the album is the second single that the band released from the album, and is my personal favourite from the whole record. Benji really seems to show off his great range of vocal skills in this track from start to finish. With features on this track from Reef frontman Gary Stringer with vocals and and incredible guitar solo from Motorhead guitarist Phil Campbell to close the song, it really was destined for greatness. If that doesn’t make you want to listen to it, AC/DC frontman Brian Johnson even used it as an outro track for his own TV show!

Sixth track on the album is Loud and Clear is most certainly one of the highlights of the entire album, along with Machine. The overload of reggae style vocals and a badass chorus makes this track in-particular a total banger along with the sick use of a drum sets most underrated element, the cowbell!

Track nine from the album, Broken Glass, in my opinion is probably the only more mediocre track on the album with a few elements of the instrumentals not really leading anywhere.

Saying It Now is the closing track on the record and is the only acoustic track on the album, which offers the listener four and a half minutes to have a breather after the crazy tracks that were before this.

Catch Skindred on their UK headline run at one of these dates.

Overall, a great album from the Welsh 'Ragga Rockers' which some instrumentally heavy hitting tracks including 'Machine' and 'Loud and Clear'. The new mature sound from the band fits perfectly and I look forward to the success that this album will have on it's release.

I'm Shay! I'm a University student in West Wales, UK. I'm all about music.
@rockdrivermusic
Previous Regretting The Past: Slayer – Diabolus In Musica
Next COASTLANDS Release Official Music Video for “Quiet Beneath the Yangtze River”

With more than 25 years of hands-on experience in music and creative art, Clint Maedgen exemplifies hard …