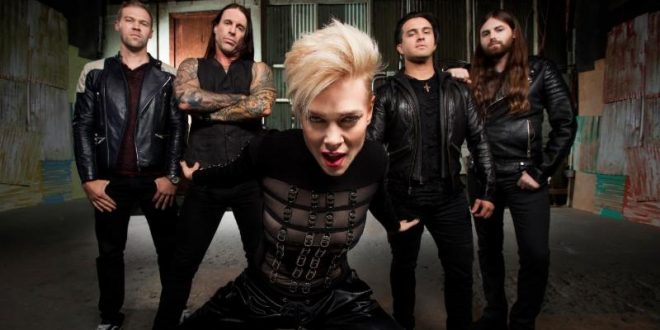 Letters From The Fire Premiere “Comfort You” Video

Letters from the Fire, featuring their new vocalist Nina Bergman, have premiered the new video for “Comfort You” – the first song from their self-titled sophomore album out June 15th. The gripping, cinematic video features actor David Sakurai (who will be appearing in the upcoming Fantastic Beasts: The Crimes of Grindelwald alongside Eddie Redmayne and Johnny Depp), at the mercy of Nina’s weaponized arsenal that includes her talents as a former ballerina in Moscow’s world-renowned Bolshoi Ballet.  PRESS HERE to listen.

The forthcoming album, produced by Colin Brittain (Papa Roach) at Steakhouse Studios in Los Angeles, is available today for pre-order digitally with “Comfort You” as an instant grat track. PRESS HERE to purchase. Physical pre-orders are also available now through indiemerch and will include the CD bundled with exclusive t-shirt designs.

“Comfort You” will be featured starting today on SiriusXM Octane’s Test Drive, while an acoustic set featuring the single and two other songs from the album can be seen at Killpop.

San Francisco hard rock outfit Letters From The Fire have ignited a groundswell of support amongst a growing diehard audience since their inception, and their most recent partnering with singer, songwriter, actress, model, and activist Nina Bergman brings an uncontainable and unmatched spirit to the hard rock mainstays – a badass energy and ethos that is perfectly embodied in this second full length album.

Stay tuned for new music from Letters from the Fire, who will be touring extensively throughout 2018 & 2019.

Tags comfort you Letters From The Fire Music Video