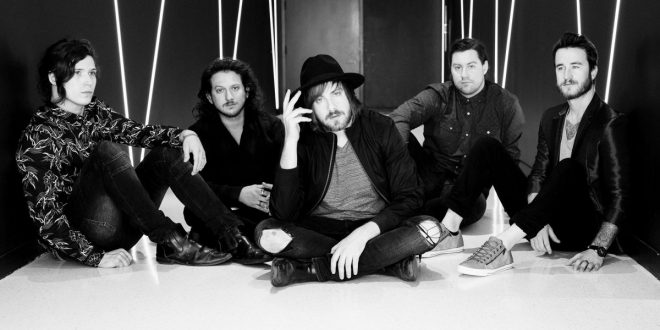 The Unlikely Candidates, made up of front man Kyle Morris, lead guitarist Brenton Carney, rhythm guitarist Cole Male, bassist Jared Hornbeek, and drummer Kevin Goddard, have achieved substantial success on both alternative and mainstream grounds. Currently signed to Atlantic Records, the Texas quintet amassed a large following on Spotify, by way of their premier single, “Oh My Dear Lord” (off Danger To Myself) landing on three prominent rock playlists: Digging Now, New Noise, and The Scene. In total, they have accumulated over 18 million streams from this single alone. In addition to also scoring a charting Alternative Radio hit, “Celebrate,” co-written with California reggae band Dirty Heads, the band accentuated the song’s presence with a performance on Jimmy Kimmel Live, taking them far beyond their Fort Worth base.

In my discussion with Kyle Morris, he highlighted how the five members met, how they click with one another, what shapes the resonance within their music, and some helpful life advice.

ME: You guys formed once getting together at a high school party. How exactly did that go down?

Kyle: We were drunk at a buddy’s house with a few friends and Cole knew a few songs on guitar. I think Green Day and a Boxcar Racer song. I was signing in Tom DeLonge’s nasally wail and we were all laughing. It sounded really good somehow. I kept more to myself back then, and it was out of character for me to be singing in front of people. But in that moment, something clicked. I felt that I could use music as a way to express a side of myself that I usually only could when I felt in my element. Music and performing felt like a shortcut to that place. The whole thing was for a laugh, but I remembered thinking that I wanted to hold on to this feeling forever.

ME: Did it coincide with any other particularly memorable moments throughout the party?

Kyle: Not necessarily. It just started with us getting drunk, and then continued from there being a guitar nearby.

ME: What could you make of each member’s playing style as you got together and began jamming?

Kyle: Cole had a heavy strum – loud and sloppy. At the time, he hadn’t played much guitar, but we were both at the same level. This allowed me to be okay with making mistakes, like singing too loud, but in a way, that helped me become a belter. Kevin hit hard and was very much a rock drummer from the beginning. Brent is such a good guitarist. He’s been playing quite well since 12, I think. He is very precise, so it gives the melodies a lot of structure and lets them really sing. Jared has a heaviness to his playing but also a type of finesse. He also has a good singing voice, which would become a really important factor in our music. It all mixes together to make a really great rock and roll sound. Melodic, but with a grit to it.

ME: At what point did you notice the chemistry between you guys solidify?

Kyle: When you’re all on the road playing together, you see and feel it. You anticipate each other’s movements and dynamics. We’d played a South By Southwest showcase and we were swerving in and out of each other’s path like some strange dance in this crowded, small club. I remember thinking it was pretty amazing.

ME: Growing up, which artists or albums influenced your musicianship, and what part did they play in shaping the sound of the band?

Kyle: I had a Clash Greatest Hits album that I wore out. I think that the anti-authority theme resonates deeply when you’re young and angsty. The Clash also wrote great pop hooks that, when factored into their rock songs, they meant something, so I guess you could say that those sentiments echoed through us.

ME: “Oh My Dear Lord” is the most notable single from Danger To Myself. Can you tell me a bit about how it came to be?

Kyle: I wrote it during a time when I was really enjoying how much of a disaster I could make my life. I didn’t feel comfortable addressing some bad behavior patterns, so I ended up doubling down on them. Looking back, it was very self-indulgent and not very smart.

ME: To me, the concept of the song involves keeping a strong faith amidst one of life’s rides that seems impossible to stop. Besides memorable hooks, do you feel faith plays a strong thematic role in your music?

Kyle: Faith isn’t that big a theme for me usually, but it does pop up. In “Oh My Dear Lord,” I wanted to have faith that something, whether it be God, luck, or any other omnipotent force, would bail me out of my free fall. Being from the Bible Belt, I think no matter what you believe, you have that instinctive urge to call on God. Even if you’re not sure there is one, it’s deeply engrained in your psyche. Another song I wrote, “Follow My Feet,” was about whether you should believe in morality and humanity, despite whether there is or isn’t a god. So, the faith dynamic does pop up in different forms in some of our songs.

ME: Tell me about the song’s music video. How did that help shape what you’d strove to convey?

Kyle: I really liked how alternately explosive and delicate things can look when they interact with water. I felt like it was a good visual pairing for the song. Slow motion flares underwater sounded chill. We just went with it.

ME: With three EPs currently under your belt, what have you learned about yourselves as individual musicians, and how you work as a unit

Kyle: I think we have learned that it’s not about the ups and downs; it really is about the journey. Sounds cliché, but we have had a pretty rough road at points. We found out, though, if you keep moving, working hard, and don’t get distracted by the fleeting highs and crippling lows, you’ll be much better off for it. Also, always carry a phone charger if you are drinking (laughs).

Kyle: We love you! Come hang out with us this summer and tweet your local radio stations to hear “Oh My Dear Lord.”

For more on The Unlikely Candidates:

I come from a family who is passionate about all things music. I learned to sing at an early age, and by 13, had my very own Fender Strat guitar. I tried my hardest at learning all that I could. Because I was born with cerebral palsy, I had to teach myself an adaptive playing style. I learned to write and record my own music, despite these difficulties. In college, I started making great use of my writing abilities by reviewing music, as well as copy editing. I guess it's best to stick with what you know, while welcoming a fair challenge at the same time.
Previous Gallery: The Revel at Prudential Center in Newark, NJ 04.07.18
Next Phoenix Rising Release Official Music Video for “Lights Out”