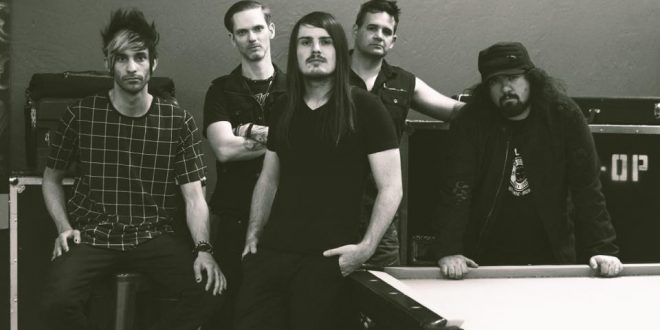 Dash Cooper and his band, CO-OP, are gearing up for the June 15th release of their first full-length album. The Phoenix, Arizona quintet is currently on tour in support of FLAW, with a series of dates continuing throughout most of this month. Their self-titled debut EP, which released a few years back on the burgeoning Ellefson Music Production label, continues to resonate with listeners through its combination of classic-inspired hard rock with current nuances.

Being the son of legendary rock vocalist Alice Cooper (Vincent Damon Furnier), Dash has not only developed his own vocal persona, but a solid touring ethic, having opened for his father, as well as a host of other names ranging from Motley Crue to Rob Halford. I caught up with Dash to discuss his happenings in live performance, early music years, his bond with his father, and reflection on current success.

ME: Let’s talk about one of your recent gigs, in Waterloo, Iowa. How was that show?

Dash: It was killer, man! It was a smaller venue called Spicoli’s Rockade – a really cool arcade venue and bar. We were with Crown and FLAW, and were actually the only bands that night. So, each band got to play a little longer, and it was a pretty rock n’ roll night!

ME: It seems like regardless how long you’ve toured, you end up learning a lot from the bands you perform with. They give you that push to improve.

Dash: Oh, I couldn’t agree more. Crown and FLAW are the utmost professionals, in how they do business and perform day to day. It’s a real inspiration to see them have their stuff together, and we’re following suit.

ME: In each of the gigs, what have you noticed about how different audiences respond to your music?

Dash: You know, it’s interesting. All three bands on this tour are very different from one another. Crown are a lot more harder metal; we’re a mixture of classic rock with modern tones; FLAW, they’re just a bit of everything. I feel like after the crowd sees them play, they assume we’re going to be that same band. When they realize we aren’t, it kind of takes them a couple songs to get into it, like, “Hey – these guys aren’t screaming; they’re not metal; what’s going on with this?” But eventually, they start to dig it!

ME: Speaking of styles, take me back to your formative days. Growing up, what was your musical environment like?

Dash: I was introduced to a very musical environment, with my dad being Alice and everything. At a young age, I was exposed to so much music. Every day was a different musical genre. Growing up and going on tour and stuff, I heard a bunch of different musical styles. Then, I developed my own taste, and started writing my own music.

ME: Were there albums that helped shape your musicianship?

Dash: Oh, sure, man! When I was growing up, my dad was listening to The Beatles, The Beach Boys, The Four Seasons, and just all the stuff that I feel like a lot of the rock ‘n’ roll foundation was based upon. But I would actually say for this band, when I was in middle school, and I first heard The Battle of Los Angeles by Rage Against The Machine, that was the one that did it for me. I was like “Wow, this is crazy!”

ME: In high school, you had the band Runaway Phoenix. From what I gather, was that your first collaboration?

Dash: Yeah! That was my first starter band that we formed in 2003 or 2004, and we did this for a few years just to have some fun and stuff. Then once we disbanded, I took a break and went to college at a state university. Then, once I got my degree, I decided to get back into music, and I started CO-OP.

ME: With CO-OP now, this is your first band on a professional level.

Dash: Yeah, definitely. I can say that for sure.

ME: By the time you’d formed CO-OP, was this a clean slate, or did it splinter of from something you’d already established?

Dash: This is an absolutely clean slate now. We have all new members, a completely different style, vocals, lyrics and everything. So, it feels good to start over and do something new.

ME: How soon did buzz about the band spread while you were performing around the Phoenix area?

Dash: It took about two years for us to really catch on, because our music community is pretty hit and miss, so it really depended on the venues we’d get. We’d gotten to open for Alice and Motley Crue, for the final Motley Crue tour. That really sparked us. It was on Bike Week, last year, which was great, and there was about 10 thousand people there. So, we’ve been gaining a steady momentum since then, and have been blessed with a bunch of fans who really dig the music!

ME: You’d joined up with Thom Hazaert and David Ellefson at EMP for the EP. How did you get to know those guys?

Dash: You know, I’ve never met David Ellefson before he signed us. But what’s interesting is that David lived in Phoenix for a long time, and we’d just never met before, which is the craziest thing! When he saw us play and said “I really dig your stuff, we should talk,” he put us in touch with Thom Hazaert. Then, we all started talking and got this deal going for the EP. We’ll continue with them for the full-length, which comes out June 15th of this year.

I keep telling everybody that EMP is one of the best labels to work for. They’re a young label and we’re a young band – not necessarily in age (laughs), but how many years we’ve been together. It works out, because I feel there’s a mutual respect there, and we’re working alongside each other.

ME: Your style, as we were talking about before, features a lot of those classic heavy vibes. How was production handled for your music?

Dash: For our EP, it was actually done in-house. We self-funded this one, and we’re doing the same for the full-length as well.

ME: What kind of sound were you gunning for while in the studio?

Dash: We call it desert hard rock – that dirty, crushy, gravely guitar tone with gritty vocals. That’s what we were going for. Classic rock with a modern guitar overtone.

ME: Tell me a bit about Melody Myers, who did the artwork for the EP. Is she returning for the album, too?

Dash: Yes. She’s done all our photography as well as the artwork for the EP and album. We met her through Thom Hazaert, who’s our label representative. She’s a great lady, and such a talent. She brought that logo to life and really, really turned it around. We’re out here on the road, and when people see us, they’re like, “Wow, that’s an incredible logo!” We’re just in complete appreciation of her, and look forward working with her more, for sure.

ME: In addition to recording and performing, your band has also worked to raise funds for you and your dad’s Solid Rock Foundation. Could you talk a little about that?

Dash: Yeah! Solid Rock is an organization geared toward getting teens off the streets and into music, dance, and art programs. It’s a really great opportunity to get them in there, and help them develop a passion for something, whatever that may be. It gives them that opportunity, for free, to learn an instrument, or take art classes, or even learn music engineering. There’s just a ton of opportunity for them to go there and learn, and they can learn a trade from this and actually potentially get a job, after learning in the studio. They ask us every once in a while to give drum, guitar, or vocal lessons. So, it’s a really cool thing we do, just to give back.

ME: That’s amazing that not only are you providing these kids with free opportunities, but also some kind of employment; that’s the icing on the cake!

Dash: We figure that you’ll never know whether the next kid that walks in is going to be a superstar guitar player. Until they’re given an environment to try to make it happen, they’ll never know. We just want them to be provided that opportunity, see if they like it, and if it’s something they can build upon.

ME: Do you work directly alongside your dad most of the time, or does he simply provide guidance here and there?

Dash: He’s actually very instrumental in the whole thing. At Solid Rock, the directors are Chuck Savale and Jeff Moore. They call us all the time to do shows and charity work. It’s such a great organization and we’re always happy to help.

ME: Most people who are fans of your dad’s music are mostly in tune to his onstage Alice Cooper persona, but not his offstage personality. What is it about your bond that showcases who he is at heart?

Dash: When my dad’s home and off tour, we’d be sitting on the couch at his house watching golf. We’ll go to the movies together or out shopping, so we’re just pretty normal people, really. It just so happens that when he’s on stage, he has a character to play, and plays it really well. But when he’s off stage, he’s just a normal, fun-loving dude.

ME: Yup, that’s Vincent for you!

ME: While at a good place in your career, as you are, do you ever take a step back and feel like, “Yeah, man, I did it”?

Dash: Yeah. You know, at first, I was thinking, “It took us a really long time to find this label, and now we’re here.” But then, I took another step back and said “Oh no, now the work starts!” You know what I mean? So, now we’re in full gear, and working hard. We’ve played seven shows in the last eight nights; it’s been pretty crazy.

ME: Overall, are you excited for the turnout of the new album?

Dash: Absolutely! We’re super excited, and we’re hoping to have a big bash in Phoenix once it comes out.

Dash: Thanks for the support. If you haven’t heard us, check out our social media. We’re on Facebook, Twitter and Instagram, and have CO-OP videos, as well as a teaser for the album. We’re hoping people will give us a chance, and see if they dig it!

For more on CO-OP:

I come from a family who is passionate about all things music. I learned to sing at an early age, and by 13, had my very own Fender Strat guitar. I tried my hardest at learning all that I could. Because I was born with cerebral palsy, I had to teach myself an adaptive playing style. I learned to write and record my own music, despite these difficulties. In college, I started making great use of my writing abilities by reviewing music, as well as copy editing. I guess it's best to stick with what you know, while welcoming a fair challenge at the same time.
Previous Gallery: Diarrhea Planet at The Regency Ballroom in San Francisco, CA on 03/31/2018
Next Review & Gallery: The Darkness at The Regency Ballroom in San Francisco, CA on 03/31/2018