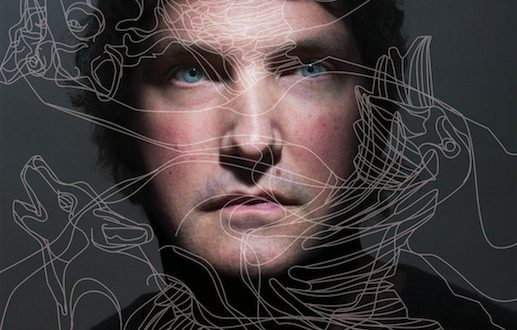 New York City based artist Nathaniel Bellows is, first and foremost, a writer and everything artistic he touches is colored by his adherence to that discipline. Bellows, however, is a formidable musician and visual artist, as well, as evidenced by his second full length album release Swan and Wolf. It’s a notable independent release for a number of reasons, but one of which is the somewhat lavish presentation Bellows has arranged for his second studio recording. The album’s ten songs come with illustrations for each number that bring the song lyrics together with art inspired by illuminated texts and work from palimpsest sketchbooks. Swan and Wolf is definitely an expansion of his musical vision compared to his fine debut The Old Illusions, but Bellows’ performed poetry is never so lofty or affected by craft that it’s rendered all but inaccessible to general audiences. His voice proves to be an effective instrument for conveying the album’s emotional tenor and listeners are, more often than not, sure to turn away from these songs having derived meaning of their own from his writing.

The echo and double-tracking applied to Bellows’ voice on the opener “Only Love” and other songs on Swan and Wolf will alienate some listeners, but others will hear the effects Bellows is attempting to achieve with such decisions. These lean and stripped down folk songs are varied enough they need no further color, but Bellows does want to invoke a full unity in the recordings – the musical and aural mood neatly dovetailing into his vocals and lyrical content. “Only Love” has a surprisingly rambunctious musical arrangement, particularly around its guitar, despite the low-fi DIY origins of Bellows’ recording. “How High” finds those post-production effects applied to his vocals less than before and the expanded palette from bringing piano into the mix results in a different sort of achievement than we have with the album opener. His passionate vocal for the song “To Wait” locks in sympathetically with another delicately wrought acoustic guitar arrangement and the song shows off the same discipline marking Swan and Wolf as a whole.

“Keep In Mind” comes off as one of the more personal numbers on the release with a restless, forever changing vocal melody that Bellows’ voice retains full control over and the acoustic guitar rises and falls in the mix. He serves up one of his most forceful vocals with the later track “What Then” while the music takes on a brighter hue, in some respects, than we experience with the album’s surrounding songs. There’s some exceptionally lovely backing and double-tracked vocals accompanying Bellows on the song “I Awoke” and they are, likewise, among the album’s finest lyrics. The closing number “In Time” pulls a final surprise out for listeners as Bellows brings violin in to complement his voice and acoustic guitar playing – it makes for a fine trio working in the burning heart of the song. Swan and Wolf is definitely one of 2018’s more formidable independent releases and distinguished by its high level of lyrical and vocal excellence.

Stephen Vicino is the founder of MusicExistence.com. He created this site to give talented musicians a voice and a way to be discovered.
@@svicino
Previous Gallery: Russian Circles at The Great American Music Hall in San Francisco, CA 03/29/2018
Next Ariana and the Rose to Host NYC Residency For Galactic Immersive Live Music Party at House of Yes