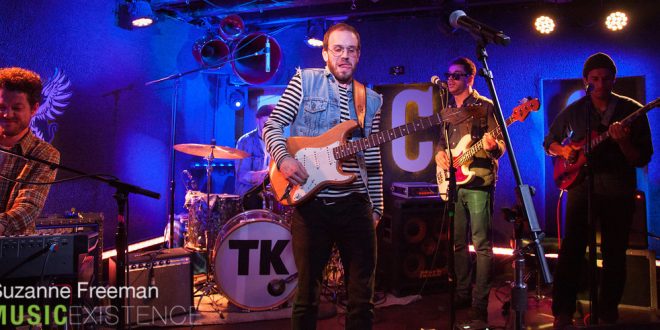 Theo Katzman just wrapped up the sold out U.S. leg of his tour before moving onto Europe.  I was able to catch a few of his east coast shows, but the show he played at the tiny DC9 Club in Washington, D.C. was pretty special. If you’ve never been, it’s a very intimate venue and the stage is only about 6 inches high, so that leaves the band pretty much eye level with the crowd.

Katzman played songs from his two previously released albums, Heartbreak Hits and Romance Without Finance, along with his “Four Fine Gentlemen”- Lee Pardini on keys, Jordan Rose on drums, James Cornelison on guitar and fellow Vulfpeck band mate, Joe Dart on bass. One of Katzman’s (and the crowd’s) favorite things to do is to conduct a sing a long with audience members. He often hops off stage and strolls through the crowd asking the audience to perform their specifically assigned segment of the three part harmony. Another highlight of the show was when Bridget Kearney, who opened for Katzman joined him on stage for a duet cover of Fleetwood Mac’s “Say That You Love Me.”

One of my favorite parts of the night was when Katzman covered The Eagle’s “One of These Nights.” Joe Dart started things off with a super funky bass solo, during which Katzman dropped to his knees and did his best impression of Dart on the air bass. They ended the set with, “Do As The Romans” which meant another audience sing-a-long and the appearance of Katzman’s now famous leg kick (pictured below).

It was an amazing set with a lot of audience participation and singing. There were a few in attendance that know Katzman and Dart from their funk band, Vulfpeck, and didn’t know what to expect from a solo Katzman show. When I spoke to them after the show they noted that while the solo show had a different vibe, that they appreciated the talent of Katzman and were surprised at how amazing he was even it was a bit different. The moral of that story is that you need to get yourself to one of his shows.

Fun Loving Music Photographer and lover of live music in general. I am most likely to be spotted with a coffee in one hand and a camera in the other, somewhere in Philadelphia, New York City and everywhere in between. For more of my music photos: http://myphotos.bellemorephotography.com/
@bellemorephoto
Previous Gallery: The Sword at The Fillmore in San Francisco, CA on 03/26/2018
Next Album Review: The Dirty Mops – In Any Other City