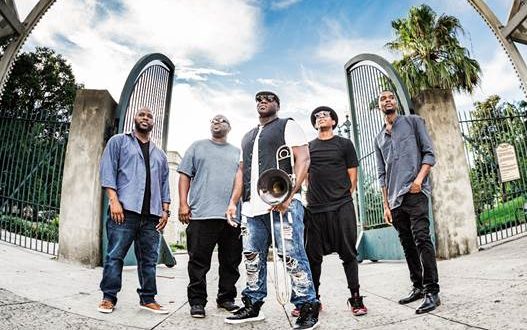 New Orleans-based funk band Big Sam’s Funky Nation release their new track “Buzzin’” today which premiered on Relix. The song shimmies from talkbox into swaggering clean guitars, all while painting a vivid picture of hot and heavy love at first sight on the dance floor. “Buzzin’” is the first track off the band’s upcoming album Songs in the Key of Funk to be released on May 4, 2018 tying into their performance at the New Orleans Jazz & Heritage Festival.  PRESS HERE to listen and PRESS HERE to pre-order the album.

“’Buzzin’’ is one of those songs that’s about trying to holla at the baddest chick in the building, finally getting her & being hooked like a drug. She keeps you buzzin all night till the sun comes up & all night again. You’re pretty much a junkie for her lovin’. When writing this one, some of my favorite cats came to mind like, Zapp & Roger, and Morris Day & The Time. The track is funky and has a vibe! Guaranteed to make you shake something!” – Big Sam’s Funky Nation

Against the backdrop of Crescent City, Big Sam’s Funky Nation released five fan favorite albums and quietly developed a devout following. Powered by jaw-dropping technical talent and uncontainable energy on stage, their performances have become the stuff of legend. Big Sam ensures you’re not just a part of the crowd, but “a part of the show dancing and singing along.” Beyond standout sets at the likes of Voodoo Music + Experience and New Orleans Jazz & Heritage Festival, the band has performed at Bonnaroo, SXSW, and Austin City Limits, to name a few.