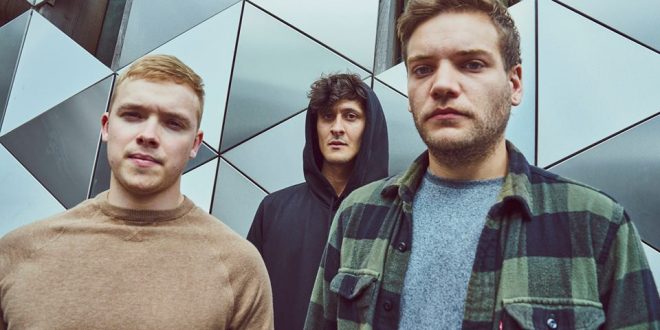 Interview with Adam Roffey and Luke Caley from Press To MECO

With their sophomore album released 30th March 2018, the alt-rock trio from Crawley, England are gearing up for future events, including small gigs to celebrate the release of the album, and larger festivals, like 2000 Trees in Cheltenham, UK. So what do the members have to say about all this, plus their recent signing to Marshall Records? We chatted with Luke and Adam from the band, and asked about touring, the album, and all the shenanigans in between!

Last time we spoke, you were on your headlining tour at the end of 2017. Since then, you’ve supported Don Broco on their recent tour – how was it?

ADAM ROFFEY: Yeah, [the tour] was really good. It was 8 shows, and everyone in the crowds were amazing, wanting to jump around and in mosh pits and stuff, and Don Broco are really nice.

L: Yeah, they’re wicked! It’s cool to take us out, ‘cause it’s like they probably had so much external pressure as people pushing their own bands, but the fact they chose us even though we’re not the biggest band; it’s really cool.

A: And the other support acts were really good as well.

L: Yeah, Yonaka were really good, and Man With A Mission was sick. We were with Future Love on the first couple of days, they’re good friends of ours anyways. They were awesome.

You’ve been announced at Teddy Rocks Festival, and 2000 Trees Festival – you excited?

A: Yeah, definitely! We played 2000 Trees a couple of years ago, on the exact same stage; it was really cool, it’ll be nice to go back again, like last year, we were there doing acoustic stuff at the Reuben Tent, and then the campsite so it’s always a good festival, and they’ve upgraded this year; 2000 more people – 10,000 people now! Nice and packed out!

Recently, you signed with Marshall Records – how has that been?

A: Yeah, it’s been really cool actually. We were gonna release the album last year, it was a couple of weeks away from release, and they came and stopped us, and talked to them, and we decided they could give us a good platform and backing for us to release the album. We decided to go for that, and obviously, once you’ve done that, you have to change the release time for the record, so that’s why we released it later. It’s nice that we’re finally to be able to release it with them.

L: So we knew that deal was happening; it came in quite late, I think it was 2 weeks before the self-release date that we knew we basically had to make a decision ‘cause Steve [Tannett, Marshall Records] called us up and was like, “A bunch of stuff’s changed at Marshall Records, we’re sort of re-working it, we’d love you to reconsider our initial offer”, and we met with him, and everything that he had to say was really good, and everything they changed about was really good; the whole thing just felt right, so it was one of those things where, if we were gonna do this, we had to decide literally tomorrow, after the meeting, and just go for it. I’m so glad we did it, it’s been really good so far.

One of the ways you stand out is the face you harmonise on your songs – what’s your inspiration behind that?

L: It’s not so much “inspiration”, I think it’s more…it just sort of happened. When I was younger, I used to love System of a Down, and although they’re not the most obvious band, having loads and loads of members with harmonies; they were the first band for me that really showed two singers sharing leads. I remember when we started, it was just an idea that we wanted to base the band around, and vocally, there wasn’t a frontman, and there wasn’t just one lead vocalist. It’s how in pop music, it’s something that is so normal, but in the rock genre, you don’t get it that much, and it’s just something we really enjoy. It’s just fun to write with three different voices.

What’s your favourite song on the album?

A: I reckon my favourite is “A Place In It All”, just ‘cause it’s something completely different for us, and it’s nice; I like that one, I like playing it live.

If someone were to listen to this album who had never heard of you guys before, what would you want them to take away from it?

A: I’d agree with that! I’d like to think that someone would like to play one of the instruments or start singing after hearing it.

L: Yeah, that’s cool. Or even just showing a friend.

A: Or downloaded it.

Finally, now the album is about to come out, and once you’ve played those festival dates, what’s next?

L: Touring, and then we’ll start writing again. We’ll probably start writing soon, but the visible plan is that we release the album, we’ll just be touring for the next year and a half, and then probably start gearing up for a single off the 3rd album; that’s the plan. We’re just planning as much as we can, whenever we can! Especially since we’re trying to get overseas to Europe a lot more this year, and hopefully go to the States next year as well.

Here’s To The Fatigue is out 30th March!