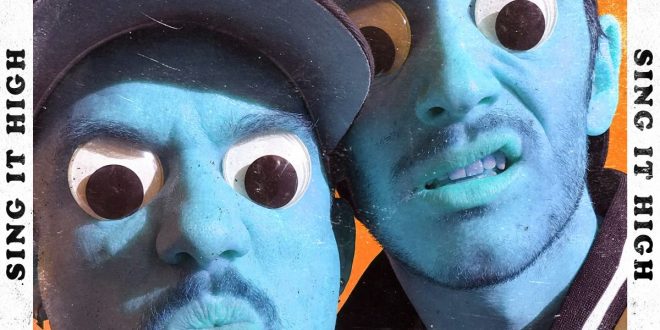 The new Little Stranger single “Sing It High” encapsulates in its title some of the Charleston, South Carolina duo’s greatest strengths. The spirit and attitude separate them from the pack as more than just emptily boisterous musical mischief renegades and, instead, emphasizes the underlying intelligence and creativity behind everything they’ve done thus far. This single shows real growth as individual artists and an overall artistic unit; if either John or Kevin Shields has a desire to hog the spotlight all for themselves, it never shows through here or elsewhere. Instead, “Sing It High” displays the same unified creative vision that’s marked Little Stranger as different since they first emerged on the scene. “Sing It High” has the sort of quality that promises to take the duo onto a bigger stage than they’ve occupied before and one listen to this track will assure even the most jaded of listeners they deserve to be there.

The confidence coming off this track is palpable. It moves like a song that knows where it’s going from the outset and it never runs off road throughout its four minute duration. The drumming is one of the most memorable elements of “Sing It High” and gives the song an intense rhythmic pop from the first that Little Stranger sustains throughout the song while still adding great flourishes from a number of instruments. There’s no sense of instrumental excess throughout the song; instead, everything is honed to a fine edge serving the song first and foremost while avoiding any notions of self-conscious virtuosity. Everything comes across as unified, whole – the vocals and music alike complement each other without ever drawing attention to what they do and each element knows when to assert its presence and when to draw back. It’s a wonderfully orchestrated performance, in some ways, but never sounds anything less than natural.

None of the vocals they bring to bear in the song possess traditional music beauty, but they crackle with personality and melodic substance. They are also immensely likeable and it helps the message of the song, nothing especially complicated, stick even deeper in listener’s memories. “Sing It High” has a pleasantly boastful edge that dovetails some into traditional elements of this musical style, but avoids any of the negative or hollow bravado we hear from similar acts with different themes and so on. Little Stranger haven’t been around for many years, but they’ve made impressive strides thanks to the unique talents they bring together in a package that, despite its indie status, sounds every bit as thought-out and polished as any major label act. “Sing It High” is one of their best efforts thus far, hands down, and will definitely be a highlight for their new EP. It has all of the qualities that the duo’s admirers cherish while still showing impressive development of their core sound and songwriting approach.

Stephen Vicino is the founder of MusicExistence.com. He created this site to give talented musicians a voice and a way to be discovered.
@@svicino
Previous A Day To Remember Added To LAS RAGEOUS Lineup; Festival Set For April 20-21 in Downtown Las Vegas
Next RĀI New Single ‘Back to Life’