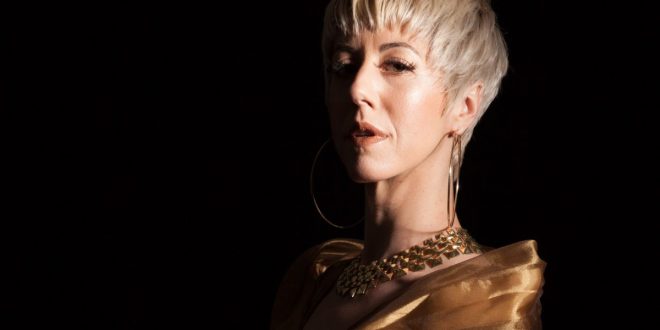 Boston based musician Ruby Rose Fox has made a name for herself in her local scene over the last few years. In her young career, she has already taken home awards for “Best Female Vocalist” (Boston Music Awards 2015) “Best Singer-Songwriter” (Boston Music Awards 2016) and “Album of the Year” (New England Music Awards 2017). Her debut album Domestic made waves on the local scene, her music was described by The Boston Herald as “ arty, edgy rock ‘n’ roll that lets her be Lou Reed and Nico at the same time… [and seems] to come from another scene, another world.”

Now, Ruby Rose Fox is finishing up her sophomore album, a record titled, Salt, an album funded entirely by crowdfunding and a grant from The Boston Foundation. Salt is due to come out in 2018 and will see her taking some major steps forward her musical career. Last month, she released a new music video for “Freedom Fighter”, a song from her debut album.

We talked with Ruby Rose Fox about her upcoming album and a variety of social issues that she tackles within her music, here’s what she had to say.

Your new video for Freedom Fighter deals with some pretty heavy subject matter, how important do you feel it is for artists to use their platform to bring more awareness to the issues facing us today?

America is dealing with some heavy subject matter. I reflect it not as the duty of an artist, but as a citizen and community member in a conversation about what is happening in our “democracy.” But, I think your question is meant to discuss the value of entertainment vs. art. I love entertainment, but like sugar, it’s everywhere, it’s in everything, and it’s making us sick. Ha, I woke up in a mood this morning!

It’s a really interesting time to be making an album, what kind of subject matter should fans expect from the songs on this record? Are the songs very personal? Political? A mix?

It’s as personal as it is political. I wanted them to be so interwoven it would be impossible to separate.

In another interview you mentioned wanting to create more intimacy with your fans on this record, could you elaborate on that bit?

Yes, this year I wanted to get to know them better personally and make music that was more vulnerable which took a lot of work and some bravery. I began a subscribership which not only helped my fans support me directly, I have been able to connect with them too. Many of them are actually quite beautiful artists. In terms of music I have solved the intimacy conundrum by using binaural technology often used in ASMR. It is intended to create sensations (sometimes tingling) in the body.

Is it the sort of record that would be best experienced listening to it with full attention, the music used to be consumed? (i.e. sitting down and listening all the way through in a peaceful setting)

It has to be listened to with headphones. Binaural recording was really developed for virtual reality. So listening without headphones is a little like watching a 3-D movie with no glasses.

You crowdsource the funding for your albums, do you feel like that puts more or less pressure on you when you’re making an album?

All the pressure has come from within and to stay as true to myself as possible when faced with all the challenges of surviving and thriving under capitalism.

You also mentioned how Salt is kind of you moving forward from your first album, and not looking back, does that mean a different approach to your songwriting as well?

I’ve always shot from the heart and hip in songwriting. I don’t know where songs come from, so I only have so much control over that. I do have a commitment to integrity which means, for me, I’m less and less interested in any sort of industry fame or success. That probably means the work will be less commercial.

I understand you went about recording this album a bit differently, even down to using a special type of microphone, and learning more about how sounds affect people, can you tell us more about that?

I learned about ASMR (Auditory Sensory Meridian Response) from my best friend Sarah who was listening to it with her boyfriend. ASMR is a tingling or sensation cause by specific kinds of sounds and can travel down your meridians. There is a spectrum of sensitivity though. Most people who are extremely sensitive have been since childhood and know about it. Right now it is still underground on Youtube, and probably because it is connected to physical pleasure and associated with sex. It’s a strange world when we have a President who assaults woman’s bodies but we are still very shy about respectfully and curiously feeling the most basic physical sensations in our own.

You have a special relationship with your fan base between the album crowdfunding, and your subscribership, do you feel that this brings you closer to your fans as an artist? How so?

Yes. I would say I know more than half of them personally now. I know their spouses names, I know their favorite songs, I know what instruments they play. I really love them. I consider it a huge honor to get to do what I do and they are a major piece of my freedom and funding.

As you go forward into a new era with Salt, will you be adding anything to or changing your live show along with it?

Yes, I am developing a one-woman show based on the record that will likely be hitting the streets this fall thanks to the Boston Foundation.

Could you tell us a little bit more about your “Gifted” program for vocal lessons, and what inspired you to launch that?

Very honestly, my mother. I was very angry with her over politics and I called her a racist. She said, “Ruby, I do what I can for my community and people who need help when I can.” She then listed a bunch of things she had done in the last month to help woman in her office get health care with no access to a computer. She said, “What do you do!??” When I looked at myself in the mirror it was pretty dark.

I spent a lot of time online railing against systematic racism but I was actually not DOING anything to actively dismantle it. Because I am an artist, I’ve always felt on the brink of poverty and didn’t feel I had resources. But I had a lot. Not only did my fans contribute but Music Drives Me gave me a grant so I will be teaching privately and at The Hyde Square Task Force for a couple years. Gifted is about offering teens in Boston a chance to train their voice with little to no access in the Boston Public Schools. I grew up in a dying boom town called Binghamton, NY (which is actually a song on the album) and thanks to a Rod Serling (who wrote the Twilight Zone) I had a first class singing education.