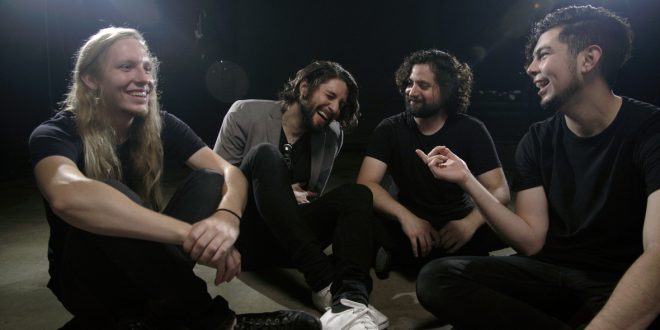 Almost 17 years to the day since it was released as a single, LA-based quartet Coat Check Girl have shared their reimagined cover of Linkin Park‘s smash hit “Crawling.” The alt-rockers took the Grammy winning track and gave it a stripped down indie makeover, like they were getting the song ready for a date with the cute emo kid at school. The result is contemplative and suspenseful, literally slowing the track down to a “crawl” and showing a more vulnerable side to the lyrics.

“Linkin Park was one of my first music loves and I have always looked back at them for inspiration (I even have a Hybrid Theory tattoo on my forearm),” says vocalist Andre Rodriguez. “I had the chance to meet all of them and from the bottom of my heart, I have to say that I have never met more down-to-earth people in my life, so when I heard the news about Chester I was devastated. I felt like I lost a mentor, so I proposed to the band to play a Linkin Park song in our live shows in honor of him. We picked ‘Crawling’ because the lyrics are unbelievably powerful. The melodies are beautiful, so we didn’t really have to think about it too much. One day I started messing around with the chords and we all agreed that, that was the song we were going to cover.“

After fleeing the country of Venezuela amidst political turmoil, Rodriguez started Coat Check Girl initially as a recording project for his senior thesis. The quartet, who borrow their name from Jayma Mays‘ character on How I Met Your Mother, released their first single “Time” in 2014. In 2016, the band released their single “Yellow | Blue | Red,” an emotional track that is aimed at bringing awareness to the ongoing problems in Venezuela.

“Crawling” is available now on Spotify.