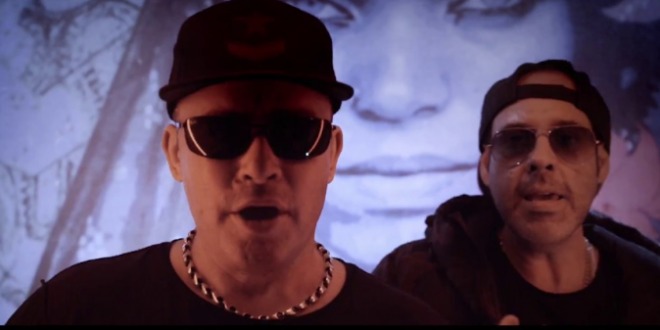 The Caribbean rhythms, urban embellishments, and pop music elements woven into Monsieur Jobs’ first single “Chow Chow eyyy Pow Pow” set the bar high for the outfit’s future recordings. The band benefits from the experienced vocal presence of Martin Cintron, longtime lead singer for the band No Mercy, alongside Toby Holguin, Stan Kolev, Charlie Illera, and Leo Jaramillo. Basswalk Latino label head Jose Fernando Holguin conceptualized the project at its start, but the creative hub of the band proves to be the songwriting brain-trust of Toby Holguin and Stan Kolev. Their work here, along with Cintron’s singing, makes an early positive impression on listeners and continues making an impact throughout the entirety of the song. It’s a three and a half minute long performance in its radio edit form and that proves an ideal length for the song.

Cintron’s singing is a huge reason why the song is successful and there’s nothing about his performance capable of convincing listeners it wouldn’t be just as effective in a longer version. He’s been impressing listeners and audiences for many years as No Mercy’s lead vocalist but transitions with ease into a different musical landscape while still demonstrating the same talent for getting under the song’s skin from the outset. He truly inhabits the piece. Cintron uses his voice like a musical instrument, rather than in some overly dramatic declamatory fashion, and the steady glide of his voice through the lyrics never has an audible lull. Instead, he tackles the Spanish language lyrics with such feeling that even listeners lacking any knowledge of the language will still be quite affected by the obvious emotion fueling his voice. There’s a good balance between the writing and musical content with the production work highlighting them, as well, with equal weight.

The musical arrangement definitely embraces a Caribbean vibe, but in quite an honest way that avoids the hamfisted theatrics of lesser artists. The drumming has a strong organic quality and many listeners will appreciate the percussion’s hard snap and intoxicating rhythms. It’s no stretch to say that this is a musical arrangement capable of physically provoking listeners and has some potential as an appealing dance number. The musical depth to the songwriting is quite real. Rather than solely relying on electronica or synth, Monsieur Job incorporates a good blend of modern and traditional sounds without ever sounding self-conscious or inordinately plotted out. Even in a radio edit form, it’s scarcely possible to imagine “Chow Chow eyyy Pow Pow” more fully realized than it sounds here. Even the Stan Kolev remix included with the release is only a creative elaboration on the brilliance we hear here; Monsieur Jobs’ first single “Chow Chow eyyy Pow Pow”, surely one of the more improbable titles in recent memory, is a winner from the first and kicks off the band’s career in memorable fashion.

Stephen Vicino is the founder of MusicExistence.com. He created this site to give talented musicians a voice and a way to be discovered.
@@svicino
Previous Echo Bloom – Green
Next Precious Child Releases Surreal, NSFW “WHOLE” Music Video!