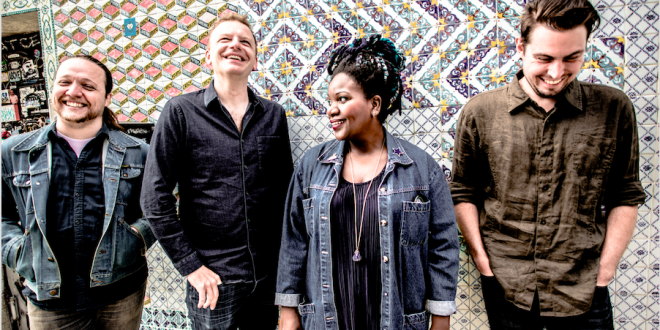 There’s a level of intimacy heard on Echo Bloom’s latest studio release Green that one simply rarely encounters these days. The twelve songs included on the New York City quartet’s latest studio recording reflect both the intensely personal nature of front man and lead songwriter Kyle Evans’ work while still providing an accessible and entertaining experience for both those familiar with the band and newcomers to their sound and style. Much of the same stylistic synthesis powering Echo Bloom’s earlier albums is in full evidence with this release, but the songs seem to plumb deeper than ever before and the obvious care that Evans and his cohorts put into every song makes this one of the year’s most rewarding releases thus far. Echo Bloom’s Green is more than just a spectacular indie release; it’s a substantive musical work fulfilling Evans’ avowed ambitions for his art and pointing the way towards an even brighter future ahead.

“Comet” is a fantastic beginning for Green, there’s really nothing better. He’s leading with his best foot as it is, without question, one of the overall best songs on Green and packs a mellow wallop from the first thanks to its intelligent build and its physically involved chorus. The guitar has a light touch on “Comet”, but that all changes with the song “The Duke”. This is a much more assertive stab in a six string heavy alternative rock tune with a lively rhythm section attack that never bludgeons listeners’ over the head and, instead, achieves much through cleverness and touch. “Cecil DeMille” is a wild 180 degree turn from what the band has done thus far for the album and the piano work courtesy of second vocalist Aviva Jaye, but Cody Rahn’s drumming is equally important in giving this a much needed direction it might have otherwise lacked. There’s a pronounced high brow pop influence, almost carnival-esque, sound permeating the song and it has a delightfully playful edge.

The combination of Evans and Jaye’s voices on “Song for Steven” mix the right amount of passion and musicality while benefitting from an exceptional production job from Kevin Salem. Aviva, obviously, willingly takes a backseat role that’s extraordinarily complementary to Evans’ lead vocal and te easy going nature of the musical attack is equally satisfying. The loftier pop influences in Echo Bloom’s music vividly comes through in the song “Anthony” and the implied personal nature of the title comes through in the lyrics with an intimate, yet accessible, point of view. “Fire in Your Eyes” has a sparkling touch at a number of points while otherwise blending the band’s pop strengths with a near strident rock edge courtesy of the rhythm section. The vocal melody is, again, a real high point for the song. Green’s largely acoustic second half reaches its apex with the second to last track “The Swimmer” and the last song, “Unchanged”, is our last listen to the unique vocal chemistry of Evans and Aviva coming together with a nuanced and slowly unwinding arrangement. Echo Bloom’s Green is as varied of a release as you’ll hear these days and wins listeners over through a combination of intelligence and musicality.

Stephen Vicino is the founder of MusicExistence.com. He created this site to give talented musicians a voice and a way to be discovered.
@@svicino
Previous Single Review: Adrift – “For You” (ft. Conn Fuego)
Next Monsieur Job – Chow Chow eyyy Pow Pow