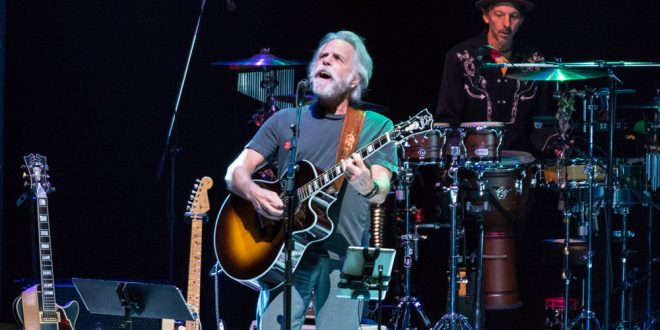 While the four surviving members of The Grateful Dead put an end to that band’s touring schedule with a career ending series of concerts in 2015 that concluded with three shows in Chicago, entitled Fare Thee Well, it hasn’t stopped those four members from continuing to go out and play The Grateful Dead’s music in different groups.

The best known group currently performing the Dead’s music is Dead & Company, which consists of three of the remaining four original members – Bob Weir (guitar), Bill Kreutzman (drums and percussion), and Mickey Hart (percussion and drums), who have been consistently touring since the end of 2015. Dead bass player, Phil Lesh, has also been performing the Dead’s music with the Terrapin Family Band, which includes his son on guitar, but with fewer shows and less travel than Dead & Co.

And Spring 2018 has another configuration of Dead founders bringing Grateful tunes to the people: the Bob & Phil Duo! Weir & Lesh teamed up for a small three city, six show tour with a mixed format and special guests. The tour consists of 2 shows each in New York, Boston, and Chicago. The Duo hit the beautiful Chicago Theatre on 3/10/18 for the next to last night of the run. And it’s a bit of a shame as the signs indicate they are hitting their stride, which resulted in a fantastic couple of sets in the windy city.

First set format consisted of Bob, Phil, and percussionist/drummer, Wally Ingram, and saw Bobby playing acoustically, as they opened the festivities with Phil singing Box of Rain. While Phil struggled with a high note at the very end of the song, his mid-range voice was strong and on-key all night. Box gave way to Ramble on Rose, continuing the acoustic theme which went all the way back to Cosmic Charlie and Operator. The sound in the grand, ornate Chicago Theatre was crystal clear and perfectly mixed. The Saturday night crowd was appreciative, enthusiastic, and mostly on their feet during the whole show.

Bobby broke out his electric for versions of Estimated Prophet and West LA Fadeaway, which shared in common slow, sultry grooves, and extended jamming. During a heightened moment in his Estimated solo, Bobby gesticulated feistily. During solo turns in West LA Fadeaway, he channeled some Mark Knopfler notes/sounds, before finding a late 70’s Shakedown Street vibe in a second solo later in the song.

The second set saw an increase in musicians on-stage, as well as an increase in pace and intensity. Joining the Duo (and Ingram) was guitarist Larry Campbell, singer Teresa Williams (both of whom accompanied the Duo for the two Boston shows), and surprise guest…and fan favorite…Piano/keys player from Dead & Company, Jeff Chimenti. The sextet started things off with an upbeat Playing In The Band, that gave everyone a chance to solo during an extended instrumental section in the middle.

A Scarlet Fire combo followed, in which Phil’s lead runs stood out, as did Jeff, who took another solo turn much to the crowd’s delight. Larry Campbell’s contribution here was notable too, starting out on acoustic before switching to Mandolin for a fiery solo (pun intended!).

A lengthy Dark Star (20+ min.) that was at times frenetic, and others groovy, was emblematic of every number in the second set: they all were stretched out for tasty jams and textures. In fact, the only song in the second set to come in under 10 minutes was an interesting version of U.S. Blues in the encore, which got a little messy with vocals on multiple verses botched/missed. But it gave a humorous ending to what was a supremely satisfying second set that had the crowd cheering loudly throughout.

Random Thoughts: It’s great that Bob & Phil can just decide to play some shows together and head out there and keep the music alive…and it’s nice to see their connection intact. Larry & Teresa were good additions to the mix. Teresa seemed like she hadn’t quite found her comfort zone on stage, but her background vocals were tasteful. Larry is a strong player acoustically, as well as on electric. His electric leads were captivating, and a good blend with Bob’s enigmatic style. Jeff was a really pleasant surprise, who brought energy and gave the second set a big band feel which translated immediately with the second set opener, Playing In The Band.