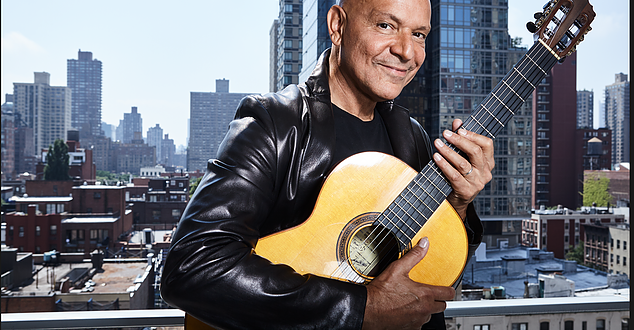 The “Best of Gerard Edery” features one of the world’s most renowned musical polyculturalists’ music. He uncovers the synergistic and haunting dimensions of a broad repertoire of traditional music imaginatively arranged for contemporary audiences.

By weaving folk songs, chants, and prayers from across centuries and across Europe and the Middle East, he shows that the human need for a spiritual dimension defies all boundaries of time and place. This ecumenical program uncovers the surprising synergies between Eastern-European (Jewish and Christian) and Middle Eastern (Jewish and Arabic) musical faiths. Join him for a unifying experience as his voice blend in devotional and secular songs from the far-reaching Sephardic Diaspora and Eastern Europe.

GERARD EDERY (Vocals/Guitar) has at his command a remarkable range of ethnic folk styles and traditions. He regularly uncovers and preserves songs, stories and melodies from Europe and the Middle East, and energizes these repertoires by interpreting them for contemporary audiences. One of the world’s foremost experts in the wide-ranging music of the Sephardic Diaspora, he is a recipient of the Sephardic Musical Heritage Award and a Meet the Composer grant for his original songs. A performer in great demand throughout the US, Canada and Europe, he has performed at prestigious venues and festivals throughout the world. In addition to his busy concert schedule, he has released 17 CDs on the Sefarad Records label as well as a much-acclaimed Sephardic Songbook. www.gerardedery.com

“An ecumenical celebration that honors both Christianity and Judaism!” The editors, MANN ABOUT TOWN

“‘Two Faiths, One Voice’ just might be the most culturally eclectic item in Edery’s already diverse catalog.”  Alexander Gelfand, THE FORWARD

“The music was haunting, always in a minor key, and indeed it was difficult to determine whether the melodies came from Jewish or Christian sources. Both Edery and Krupoves are compelling performers and accomplished musicians.” Irene Backalenick, ALL ABOUT JEWISH THEATRE, JEWISH POST & OPINION

“With the great Lithuanian ethnomusicologist, Yiddishist and singer Maria Krupoves, Edery embarked on a global series of concerts.  (…) If audience reaction is any indicator, the musical collaborators have succeeded in this endeavor, with huge ovations after every song.” George Robinson, JEWISH WEEK

Stephen Vicino is the founder of MusicExistence.com. He created this site to give talented musicians a voice and a way to be discovered.
@@svicino
Previous THREE Songs on YouTube Free Preview Listening — for a limited time
Next Rossemberg Maza’s Naughty Romp Through Amsterdam in ‘Eat It Too (Cake)’ Video