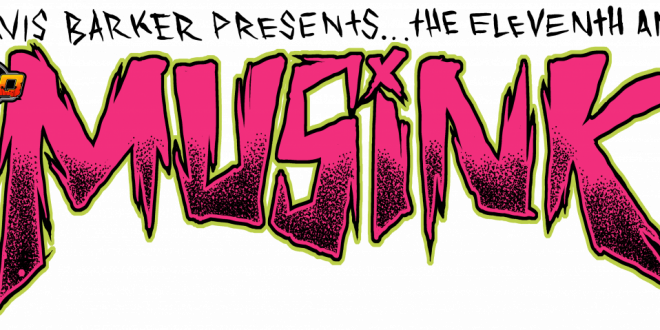 Travis Barker’s MUSINK also features daily tattoo contests, a vendor village, and the Miss MUSINK competition (presented by Sullen) at one of the world’s biggest gatherings of elite tattoo artists.

Travis Barker says, “Every year we have more and more fun and this year I am excited to announce blink-182, The Descendents, Lil Yachty, MGK and more. Super stoked for all the fans to come out for a great time of music, cars, and tattoos.”

blink-182, whose 2015 MUSINK performance was one of the first with the band’s current lineup, adds, “We are excited to come back and play the festival that brought us together.”

The music lineup for MUSINK is as follows:

Acclaimed tattoo artist and co-star of Spike TV’s Tattoo Nightmares Big Gus says, “When it comes to SoCal shows, nothing beats music and ink like the MUSINK fest! Hands down best in Cali.”

Tickets start at the following prices (plus fees) and go on sale Friday, January 26 at 10:00 AM PT at www.MusinkFest.com:

Visit the MUSINK website for all details on VIP and General Admission 3-day and single day ticket options.

Famous Stars and Straps presents Low ‘N’ Slow Car Show returns to MUSINK and will feature the best selection of custom rides, American classics and lowriders in Southern California on display, all handpicked by Travis Barker.

The 2017 MUSINK—the 10th annual event—had over 20,000 in attendance and received rave reviews from the media. Tattoo.com said, “Music, ink, and cars are the trifecta of epic, and it is also MUSINK in a nutshell” [March 18, 2017]. Elsewhere, AXS.com proclaimed, “The event has emerged as the largest tattoo and music festival in the nation” [March 20, 2017].

All ages are welcome at MUSINK, and kids 7 years old and under get in free.

The OC Fair & Event Center is centrally located in Southern California, just off the 405 and 55 freeways at 88 Fair Drive in Costa Mesa. The venue is convenient to all in Orange County, as well as Los Angeles, San Diego, San Bernardino and Riverside Counties. John Wayne Airport in Irvine, CA is also easily accessible for those traveling from other parts of the U.S. and the world.

Photography is a passion of mine and I am blessed to be surrounded by Amazing Industry Photog Pro's
@modernpics
Previous Gallery: Nothing More at Shiprocked
Next Military Rockers Contending Talk Suicide In “The Storm” Music Video