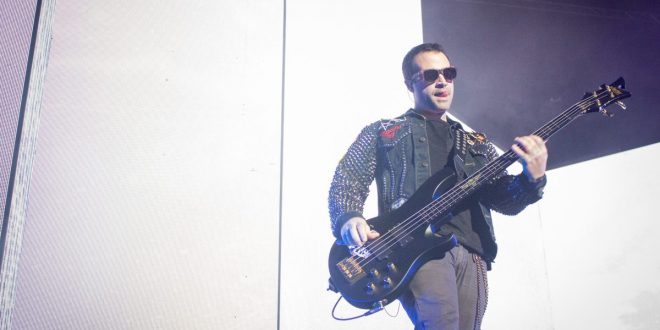 Worldwide rock sensation Avenged Sevenfold brought The Stage World Tour with special guests Breaking Benjamin and Bullet For My Valentine for a rocking evening in Little Rock, AR. Both opening acts put on phenomenal performances, both emitting high energy for a raging crowd.

Suspense grew as eyeballs blinked on each cinematic screen, giantly displaying across the stage of floating in a galaxy.  The band nailed out fan favorites like “The Stage,” “Afterlife,” and “Hail To The King.” A7X briefly described their day in Little Rock and had nothing but kind words on how much they loved it. “In 2006 we were at Ozzfest that year… This MTV thing called TRL actually played a song called “Bat Country.” Then we put out this song, and they took us off forever.” as front man Shadows exaggeratedly shouted “Beast and the Harlot!”

The animated artwork transformed throughout the night, from extravagant skulls to haunting demon things. A slow guitar solo hid in the blue shadows of the stage as heavy grunge guitar panned across the crowd for “Buried Alive.” Fans cheered with the utmost respect, lighters out, for the tear jerking tribute to James Sullivan “The Rev” – Avenged Sevenfold’s percussionist who passed away in 2009. Sullivan’s home video reel played against organ before introducing “So Far Away.” The audience blindly sang their hearts out, lighters remaining up during the heartfelt performance. Sweet acoustic guitar danced against the beat of the snare drum as Shadows preached to the crowd. “Little Rock – all I can say is enjoy every single moment of your life… Enjoy yourself with your friends and family.” The home videos of the band and their time with Sullivan came to a close.

Fans did just as Shadows requested. As the arena faded to black, haunting chimes rung between the walls. Fans loved the rapid fire drums, screaming “nightmare” right on cue. Shadows expressed a ghoulish laugh, and every hand in the sky clapped along to the high energy track. Bassist Johnny Christ made his way to the front of the catwalk, rocking out close to the crowd. One last “nightmare” chant roared through the arena, and Shadows let out a nod of approval.

Dream like guitars battled in the spotlight along with gut wrenching drums. Gritty bass created tension as Shadows said, “This is  the part of the set where we go a little back in time and play something for people in the mosh pit.” Somehow the subject veered before the band started again, asking the crowd if the Clinton’s are from here. The crowd immediately booed. Shadows joked that Bill was backstage and that they were going to bring him out, but that’s a bad idea. A hysterical fan shouted, to which Shadows asked “You rule and fuck the Grammys? That’s right.” He let out a smirk before adding, “I was trying to be nice. They don’t want rock and roll at their fucking party, I won’t show up to their party.” Fans immediately head banged along to “Burn It Down,” the strong beat waving through the strobe lights.

The band continued to rock out and make jokes with the crowd. Tracks like “Exist,” “Bat Country,” and “Welcome To The Family” made their way through the arena speakers. A7X made sure to hit all sides of the arena, connecting with fans throughout their performance. A giant astronaut rose above the stage, building intensity for a night that was out of this world. 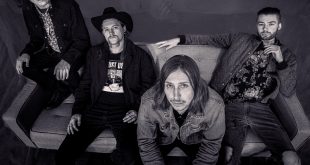 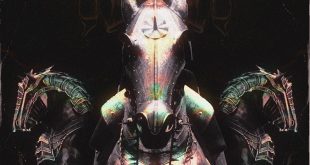