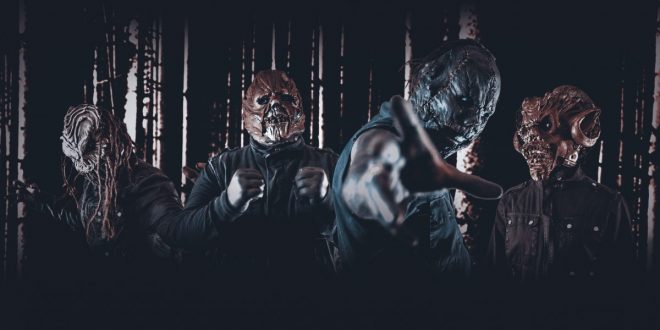 With their debut album, Make them Bleed, having just been released, masked metal quartet Terror Universal are looking to shake up the hard rock scene with their theatrical and aggressive approach to metal. Here, vocalist, Plague, took the time to answer some questions regarding the latest album, his musical influences, his songwriting process, and the band’s pans for the future.

ME: Your debut LP Make them Bleed was just released on January 19th. For those who are unfamiliar with your sound, how would you describe this project?

Plague: I believe that there is something for everybody on this record. For me to truly describe its sound, it would require me to dissect each song to bits. But, for the sake of the page, I won’t bore anyone with an essay right now. There is a lot more here then what meets the ear, so to speak. In a nutshell, each member has their heroes. We all pull from different backgrounds and each one of us have our own unique approach to achieving the ultimate vision. This album easily could have been pure “Deathcore” or “Industrial”. It could have been a 100% “Thrash” ear bleeder or even a straight melodic “Acid Trip”. The list goes on. What you get is what you hear. Four guys coming together each with their individual missions, hammering out what it is that they need to resolve sonically.

ME: Horror metal isn’t the most well know subgenre of heavier music. What is it about this style that stands out to you?

Plague: I would have to say that the one thing that stands out for me personally is the fact that I love horror movies and I get to explore a darker side of music without question. With “Horror Metal” being the platform to build upon, we are able to bypass many of the questions that would tend to bog us down. As to say, if we were some “Super Country Pop” band well-known within those circles and suddenly we released a song about some possessed gruesome thrill killer hellbent on tasting flesh for the first time within a psychiatric ward full of lobotomized vampires while the staff is made up of Zombi-werewolves who rob corpses from haunted graveyards just to climb ranks within the satanic cult they belong to down the street in the house on the left where grandma killed herself, I think we would have some explaining to do. But not with this outfit.

ME: Can you talk us through your songwriting process? How do you go about crafting your lyrics? Do you gravitate towards any specific themes?

Plague: I always just start with the first thought that comes to my head, then I evolve the situation until it is completely different then what it initially was. Then, the rest of the time I just try my best not to complicate it. But, if there is a solid thought that I want to get across, I go about it without hesitation and I always manage to make it work. If you have something to say, just say it. Riddles be dammed.

ME: Who are some of your artistic influences?

Plague: The one thing that I have always prided myself on is the fact that I am all music. “I use my ears to hear. Why? Because they are mine. Life is too short not to listen. So enjoy, for there are those who haven’t the choice” My grandfather told me that the day I judged his “Polka” music. Since that day, I have pulled influence from all music.

ME: Who are some of your favorite current metal acts?

Plague: I’ve actually been out of the loop for some time. I tend to fall into myself when writing a record. I typically stay that way until the project is released. So, I’m gonna have to get back to you on that one.

ME: What was your favorite album of last year?

Plague: Again, [I’ve] been out of it for most of the year. But, I did happen across a Nine Inch Nails EP called Add Violence that I appreciated.

ME: Before you go on stage, do you have any pre-show rituals?

Plague: Putting on the mask is about as ritualistic as it gets for me. Once it goes on, everything seems to flush away.

ME: When you aren’t in the studio, what else are you doing with your time? Do you have any hobbies?

Plague: I am a filmmaker by heart. It is my true calling. If I’m not in a recording booth or upon a stage somewhere you can most likely find me with a camera in my hand.

ME: Now that Make them Bleed is released, what are your goals for the future? Do you have any upcoming plans?

Plague: I plan to push this thing as far as I can until the next one comes a’ wrapping at my door. Who knows, maybe I’ll sleep a little.

Cain Miller is an aspiring writer who hopes to work his way up and gain notoriety for his material. Having written about film, television, music, and sports, Cain is always looking to gain as much experience as he can and continue to improve his writing abilities.
@cainemiller
Previous Life of Agony Return Home to Brooklyn for 2 Intimate Nights at Saint Vitus
Next The RPMs announce ‘Your Ghost’ single