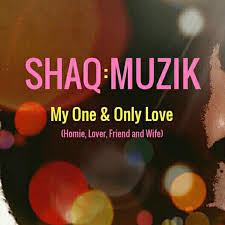 ShaQ:Muzik Release New Single ‘My One & Only Love’

Who would have thought, that a man who love something so much that his whole life would be devoted to such a thing as music. Indeed true, ShaQ:Muzik makes music his goal in life, because the way he makes it, he makes it good. Plus he not only makes good music, but he sings, writes, arranges, as well as produces said music and then some. Some insight of him besides all of this, is that he is based in the U.K. where he’s been pursuing his dream of experiencing and making such good music, which came in the form of most recently released track “My One & Only Love”.

This track is not like your typical type of track for an R&B pop artist such as ShaQ:Muzik. No, he is one of those artists, who may use a certain topic that gets used quite a bit, but his take of it, is so much more grounded it makes it more of a refresher than anything else. This topic if you could not tell by the title of the song, is believe it or not about love and a relationship. Now it may or may not be about ShaQ:Muzik’s own personal love life, but it is about some man’s love and commitment for his women. As opposed to other topics out there dealing with men being not so nice, getting into the aspects of cheating, abuse, and what not. ShaQ:Muzik does not go there with “My One & Only Love”, not at all. This track deals with the true love of this man’s life, whether that be his own or someone else’s altogether. In terms of the song’s quality, the song sounds quite nice. Vocalization being fair, as it glides against the instrumentals, moving the music along rather nicely. His vocals just give off a rather smoothness to them, that you just find yourself in total relaxation mode. The same would have to go for the music, it sounds at peace, yet refreshing, that there is true passion and pride embedded within it. It is a true music lover’s paradise really, because of all that it offers to the listener.

ShaQ:Muzik’s vocals just being sleek and rather sweet as well. Making it all come together, into a well put together piece. It could easily be one of those tracks, you can be expecting to hear played upon the late night radio stations or streaming services, that is the type of bed time type of track this one provides with its energies and momentums of it. It is for certain that a track such as this one, just gives off such an angst of emotions, that there is so much more meaning to it. Like much more to it, that cannot be heard or exposed by the human being. It’s how it warps itself into this vivid undeniable experience really. It is very hard to explain it, but that is how a track like “My One & Only Love”, gives off.

Overall though, ShaQ:Muzik’s style is well crafted, edgy, yet daring even. He may take on a topic of choice, that many before him has covered as well. But how he has done it here, just makes it anew. No other way around it, other than his vocals make it work so willingly, that the music is just there to be presentable. All the rest just falls into its rightful place. Allowing for “My One & Only Love”, to be a true romantic, of a track, that gives you something you shall remember til the end of time. Love just works out that way, which is probably the best way possible, if not the only way.

Stephen Vicino is the founder of MusicExistence.com. He created this site to give talented musicians a voice and a way to be discovered.
@@svicino
Previous Gallery: Breaking Benjamin at Verizon Arena in Little Rock, AR 2/2/18
Next Aybüke Poçan – Dedim Merhaba