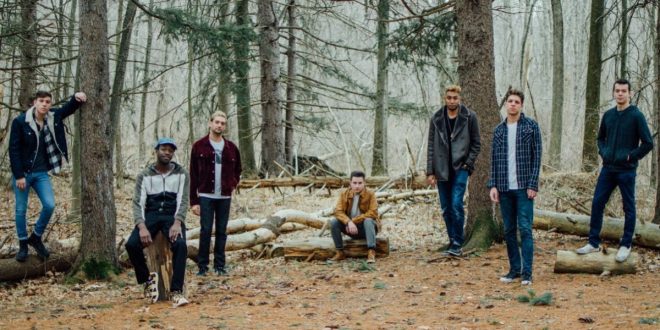 Juice is a band originally formed in Boston who are back in Boston at The Middle East on Friday, February 16. Juice’s live show mashes up rock, pop, and hip-hop with electric violin and catchy hooks – they really pack a punch as an 8-piece band and their musicianship is out of this world. They are gearing up for the release of their new single, “Sugar” which will be released Friday and is a precursor to an upcoming EP this Spring. Originally formed at Boston College in 2014, Juice was awarded the $20,000 grand prize at the 2016 Land The Big Gig Competition at Summerfest in Milwaukee, and their self-titled debut album was released that same year. They opened for DNCE at Summerfest 2017 and the band has sold out venues like Boston’s Brighton Music Hall and NYC’s Mercury Lounge.

We sent some questions over to Juice members Ben Stevens (vocals) and Daniel Moss (guitar), here’s what they had to say:

A unique and tasteful blend of all our influences and experiences.

2. How did Juice first come together? Is the band still all original members?

Juice formed as freshman at Boston College over our shared passion for music. What started as a few friends messing around grew into something bigger. Throughout college, we grew together as song writers, musicians, and friends. We have built something that we are proud to share with others: music that connects us to our listeners through shared experiences and feelings.

In 2016, we had the opportunity to perform at Summerfest’s “Land the Big Gig” Competition in Milwaukee. Juice not only won the competition, but was fortunate enough to meet Grammy-nominated producer Johnny K after the show. We have since worked with Johnny on our upcoming EP, and are blessed for having been given the chance to partner with such a skilled producer.

4. What does it take for band to stand out in a music environment such as Boston?

There are so many talented acts in Boston, so it wasn’t easy. What really elevated our popularity was our dedication to writing great tunes, and taking every opportunity we could to share them live.

5. What should people expect from your live performance when coming to see Juice?

Expect to sweat a lot

Songwriting is something that we approach in a rather unorthodox way. Our songs come from all sorts of different places – from a defining experience or emotion in one of our lives, to a jam session that lights the fire. What typically happens is that one or two of us will come up with the bones of a song, in either a set of lyrics or a musical motif. Then the idea will be presented to the band, and is often changed for the better thanks to our different tastes and tendencies.

Expect a lot of stank faces, but more importantly, new music. We’ve been crafting an album’s worth of new songs that we look forward to sharing with y’all. We’re going to be playing a bunch of shows, and debuting these new tunes along the way, so be sure to catch us on the road!

The first concert we all attended together was John Mayer. Since, we’ve seen Phish and Gary Clark Jr as a group.

Juice plays The Middle East in Cambridge, MA on Friday, February 16th at 8pm, tickets are $15 and available HERE