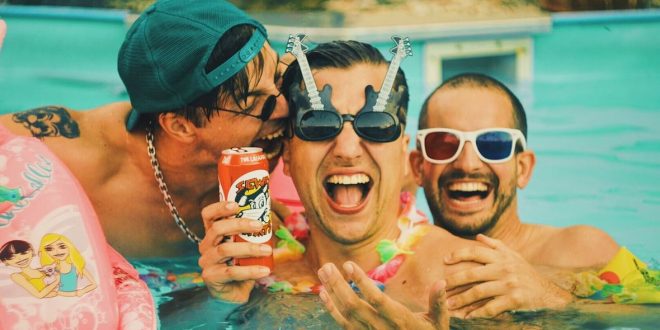 The Sewer Rats Release “Too Punk For You” Video

Fusing pop punk, 1950’s aesthetic, and American coastal living, German band The Sewer Rats have released a music video for their new single “Too Punk For You.” The video was directed by Michael Winkler at Iconographic.

“This is our second time working with Michael, he also did our ‘I Don’t Like You (When Your Girl’s Around)’ video,” says vocalist/guitarist Chris Gin. “He is such a passionate and cool guy and working together just felt really good and natural because he totally knew what we wanted. He knows where we’re coming from and has the same type of 90’s skateboard/punk rock background so the result just completely blew our minds. We had so much fun doing this video since getting into a band fight in a pool has always been on our wishlist. Also, the guy in the video is his dad and his name is Horsti. They both went to Florida to shoot and Horsti even got his first ink in the video. Horsti is so rad. We’re stoked on Horsti!“

“Too Punk For You” comes from the band’s stylish, 1950’s soaked new album Heartbreaks and Milkshakes and follows up the single/video “I Don’t Like You (When Your Girl’s Around).” The trio walks a line between Stray Cats-cool, early 90s Social D, and old-school pop punk. They describe themselves as “Mike Ness and Brian Setzer hanging out with Hank Williams, listening to the Ramones while skateboarding and drinkin’ beers on a hot summer night,” a description that doesn’t disappoint. Delivering slicked-back juvenile sing-a-longs about lost love and moving back in with your parents (again), The Sewer Rats are ready to skate their way into your heart.

“Too Punk For You” and the new album Heartbreaks and Milkshakes are available now on Rookie Records via Spotify and iTunes.