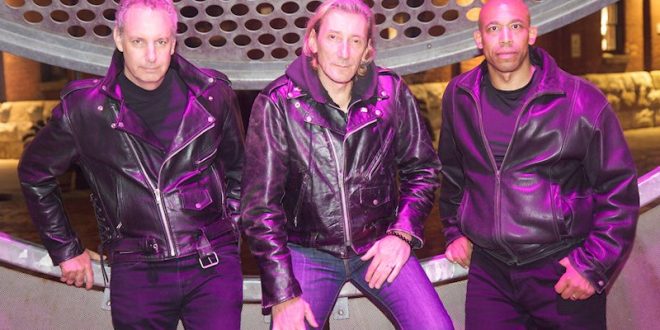 U-N-T (pronounced “unity”) is a Canadian progressive rock trio based in Toronto. Staying true to their name, vocalist/guitarist Michael Scotta Delorme, bassist Marc-L Porter and drummer Rick Smith aim to bring together even the broadest of musical crowds. Their sound rightfully contains a bit of what could suffice everyone’s liking – metal, heavy alternative, punk, and raw blues, each genre cemented on a pop foundation. On the band’s debut EP, Y. Ni. Te. (an alternate interpretation of the name), its many and varied influences come together exceptionally, in a succinct channeling that fulfills its purpose.

Y. Ni. Te. comprises predominantly of French lyrics and titles, but regardless, its musical foundation does much to elevate those sentiments. The opening track, “Ne Plus Me Voir” launches into a revved up, surf-esque tone and tempo, and sustains that just before crashing into a complementary variant. Delorme’s vocals may be somewhat masked in reverb, but they sit relatively well amidst the crunchiness of the guitars. Meanwhile, the bed of bass punctuates the song’s sense of melody. Once the chorus hits, the combined tonality from the defined instrumentation and smooth harmonies provide the song a momentary leap from its initially garage skeleton. “Present Passe,” the track to follow, maintains a similar rhythmic approach, but with greater stylistic range from its melodies. Those contained within the verses are akin to 90s alternative. To an extent, this solidifies the EP’s punch factor as brought out by mastering engineer and fellow Torontonian Noah Mintz, who had previously made noise as front man of acclaimed grunge band hHead. By the second instance of the chorus, I really began getting a feel for, as well as appreciating, the band’s approach in that regard.

Further on, the third track, “Superhero,” takes time to build, focusing on a forthright acoustic sequence before transitioning to electric. The riffs during the verses emit a similar poignancy, and although the application of reverb on them could be a bit sparser, they still resonate. Again, the chorus is a strongpoint in holding these elements together. I particularly enjoy the warmth of the vocal harmonies, and the fullness of their phrasing once put within the context of the remaining instrumentation. These initial three tracks stand out reasonably well altogether. However, the last two tracks are what demonstrate especial potential. When I was sent the EP, the penultimate track, “Je M’enfuis” is what actually initiated my interest in the band. From its opening chord sequence to the verses and chorus, I feel that the general structure is utilized the best. The pacing of the song, while not necessarily exhibiting entirely progressive leanings, feels natural in its sounding rather radio friendly. On an interesting note, “Again & Again,” the EP’s final track, was put out as its carrying single back in September. Having an up-tempo number as the finisher might make quite the shift, but it works. Riffs and vocals are still maintained in signature form, the drums exhibiting a type of distinct thud that steadies its pace. At the latter half of the song, its guitar solo is played with fluent accentuation, while it’s the space around the track that truly benefits it as a whole.

Overall, Y. Ni. Te. is an impressive debut release that combines rough-hewn instrumentation and sunny harmonies with focused musicianship. The material on offer may amount to a handful, but it is far from scant, and seems to increase in musical accessibility with repeated listens. The band’s unique name and equally poignant purpose alludes to a measure often overseen in rock, and U-N-T are undoubtedly poised for future success.

I come from a family who is passionate about all things music. I learned to sing at an early age, and by 13, had my very own Fender Strat guitar. I tried my hardest at learning all that I could. Because I was born with cerebral palsy, I had to teach myself an adaptive playing style. I learned to write and record my own music, despite these difficulties. In college, I started making great use of my writing abilities by reviewing music, as well as copy editing. I guess it's best to stick with what you know, while welcoming a fair challenge at the same time.
Previous She’s A Hero
Next JSPH channels Modern Soul Hit with “Breathe”