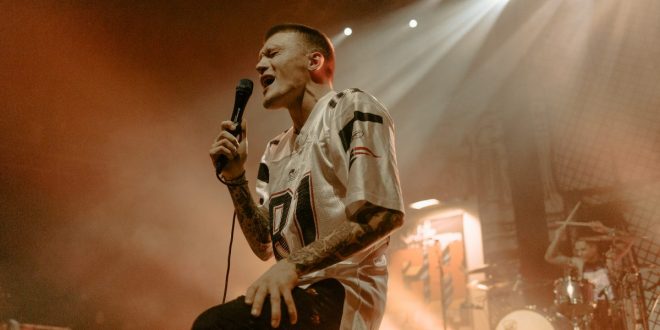 Neck Deep stopped by the Palladium in Worcester, MA for a sold out show last week. Neck Deep are currently touring their new album The Peace and The Panic on their first tour back in the states since last summer.

The sold out show was full of energy from the beginning, with the opening sets preformed by Creeper, Speak Low if You Speak Love, and Seaway. Following the finish of Seaway’s set a large white curtain was raised to the ceiling, causing the crowd to scream and begin to scream with excitement. After the crew finished setting the stage the curtain dropped, and the intro to Happy Judgement Day could be heard through the speakers. Singer Ben Barlow could be seen wearing a New England Patriots Jersey in anticipation of the Super Bowl the following day. The setlist following the intro was full of songs including those new and old including In Bloom, and Don’t Wait off their new record as well as some older favorites like Kali Ma, December, as well as A Part Of Me, which featured Hannah Greenwood of Creeper for the female vocals from the track. The band left the stage following this banger. Chants erupted from the crowd demanding one more song, they didn’t want the night to end. The band seemed to agree when they came out for two more songs, Can’t Kick Up The Roots and Where Do We Go When. The entire set was full of energy and excitement, one can see why the show was sold out.

Be sure to catch Neck Deep on the rest of this tour if you’re able!

The Peace and the Panic USA Tour

Caitlin Dunn is a Massachusetts based photographer who loves photographing concerts as well as events and lots of other things!
@@caitlindphoto
Previous Company of Thieves Debut New Single, “Window”
Next Gallery: Creeper at the Worcester Palladium 2/3/18