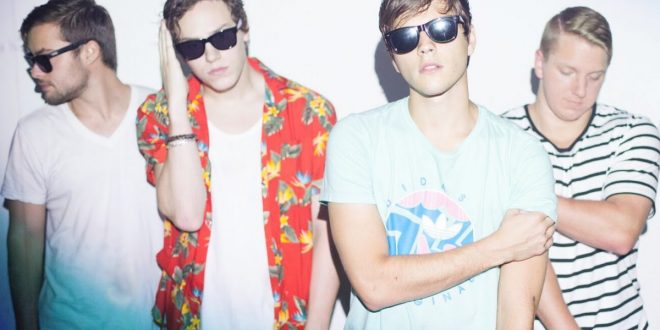 His Dream of Lions, who debuted the music video for their latest single, “Love Me Like I’m Sick” Just before Christmas are a group similar to names such as Fun., COIN, and Colony House. “Love Me Like I’m Sick” features a sound that is a departure from the band’s pop/rock style with new kinds of synths and drums while the video pays homage to glam rock bands like Queen.

The band is named after Ernest Hemingway’s novel, “The Old Man and The Sea,” because the main character experiences recurring dreams of lions playing on the beach. Even with the knowledge that they could drown, the lions carry on, representing a sense of adventure the old man once had. By taking the name, His Dream Of Lions, the members hope to be reminded of the ambitious spirit they promised never to lose.

His Dream of Lions’ new EP, Pseudo Star, is due out next week, February 16, 2018 and can be pre-ordered HERE

We sent some questions over to the band to help us, and you, get to know them better, here’s what they had to say:

1.How would you describe your sound if talking to someone who has never heard your music?

I’d say its equal parts pop and rock. We definitely have our roots in alternative and classic rock influences; think The Killers, My Chemical Romance, Queen. However we also pull a lot from modern Pop as well.

2.How did His Dream of Lions first come together? Is the band still all original members?

No the line up as it currently stands is the second or third iteration of the band. Our guitar player Nick brought the original line up together in the Spring of 2012. From there we had a couple member changes, and expanded the sound of the band by bringing in Colby on keyboard.

3.What show would you consider to be your “breakout gig” to this point?

Playing on the 2017 Vans Warped tour was huge for us, we definitely saw a dramatic spike in the size of our fan base following our leg on that tour. Wish we could have done it longer!

4.What does it take for band to stand out in a smaller music environment such as where you’re from?

I think at the end of the day it comes down to the music. We’ve been extremely fortunate in that people have been really receptive and positive about the songs we’ve been writing. I think image is also a huge factor, but if we hadn’t spent so much time figuring out ourselves as songwriters I don’t think we would have made it this far.

5.What should people expect from your live performance when coming to see His Dream of Lions?

A big ol wall of sound! That and lots of sick roundhouse kicks from Nick.

6.Who is the primary songwriter in the band?

Sort of depends on the song. I think a lot of ideas start and end with me in that I handle a lot of the arrangement and I write the lyrics, but from the time an idea for a song is born till the time its actually recorded the other guys in the band certainly change a good amount of stuff. I’d say there’s a ton of melodic content in the songs that is a group effort.

7.What should people expect from the band in 2018?

We have a new record coming out this month! So we’ll be touring around a lot in support of that.

8.What was the first album you purchased?

For me it was Demon Days by The Gorillaz. Picked it up at Target because I liked the art, but it turned out to be an extremely formative record for me.

My Chemical Romance on the Black Parade Tour in 2007!

My Chemical Romance, they were definitely the band that pushed me down a path of wanting to make music.

His Dream of Lions Online: